I officially hate mice. And Rats. And all other forms of rodents right now.

If you read my blog, you know about the mouse that has been scampering through the house at night for the last week or so. You also know that I re-named my cat UFC ( Useless Friggin Cat ) because he refused to do anything more than look at it.

Well here are the next 2 parts in my rat nightmare:

Imagine, if you will, a fairly quiet house, just around midnight. Husband is asleep, Alex is almost asleep, and I was sitting here enjoying the near silence as I watched a throng of scary bald clowns invade my Roller Coaster Kingdom park.

Suddenly the silence is shattered by a rattle behind the fridge. See yesterday Jack brought home live traps for the mouse. The kind that are supposed to adhere to the mouse, thus rendering it immobile so you can just run over there, scoop him up, and set him free back in the woods to live out the remainder of his little ratty days.

His back legs got stuck, leaving his front legs to flip him all over the place and make much noise while trying to free his self from the gluey crap. I go wake Jack up, who was less than appreciative I might add, to deal with the mouse.

After he wanders around trying to clear his sleep impaired brain, he sorta pokes at it with the broom handle trying to pin the trap part down. What this did was hold the trap in one place so the mouse could apply his obviously Herculean strength to get out of the glue and scurry under the fridge. I was not happy. Jack goes back to bed since he had to be up in 4 hours at that time to go to work, and I settle in back here for a while.

A little before 4 this morning I toddle off to bed. Not quite 4 hours later I hear this...sound. To my sleepy brain it sounded like a bag of chips being opened. I laid there and listened for a couple of minutes, but I did not hear it again so I went back to sleep. Ten minutes later I am woken up again by this noise. At this point I am thinking Alex is up and into something, so I get up and check it out. She was sound asleep in her bed. So I thought maybe I was dreaming about it, and flopped back in bed. Well I heard it again as soon as I got settled. I got up, grabbed the flashlight and started looking for the 3 remaining live traps. One of them has not moved. Another one was about 5 feet from where it was placed to begin with, with little mouse hairs stuck to it. Suddenly I heard the noise again and ran to the third one. Sure enough, there he was. His hind feet and ass fur caught in the trap. Again, his front feet make an awful lot of racket when he is trying to free his ass from the trap.

I am trying to figure out what to do because every time I moved or tried to pick the trap up he freaked out, which made ME freak out. I really wanted to catch him alive and let him out you know? But this thing has been gnawing on all kinds of things, and it ran out from under my computer table a couple of nights ago. If that damn mouse chews through a cord on my pc, there will be hell to pay.

I decide to see if Charlie, my cats Daddy Kitty, who is half feral, but has adopted us since our neighbor's moved away and left him, would have a go at him. Circle of Life and shit right?

He is as useless as his son.

And I have pics to prove it!

I brought Charlie in, and he ran right over to the food tray...which had the mouse sitting on it, and he starts nomming the leftover BBQ from last night. I stand there with my mouth hanging open. Charlie moved the bowl with his big fat face, and the mouse moved with the trap and Charlie jumped about 3 feet in the air and took off running to the front door.  Had it been open, dude would have been gone lol. So after I stopped laughing and could breathe again, I called him back over to the dish, and the mouse, which Charlie fully acknowledges by SNIFFING IT, and then stuffs his head back into the bowl of BBQ. I was not amused. So Charlie gets done eating and saunters off and I am trying to figure out how to get this mouse out of my farken house.

I decide that I will pick the whole pan up and fling it out the back door, and go retrieve the bowls for food later. I have Alex open the back door and I go to pick the pan up and the mouse finds his strength to haul ass off the pan behind the fridge, trap and all. I can see the trap, so I move the fridge and grab some tongs, really long tongs, because I was going to grab the trap and the mouse and fling it out the back door. I grab the trap, yank it out and go to toss it...and notice the trap is empty. The farken mouse got LOOSE again! So he is under the fridge recovering from several strokes I am sure, and I called Jack and told him I am sorry, I tried the good karma route, tried to save the little shit, but I am done. I am tired and cranky and I did not care if he brought a spring trap, a boa constrictor, or friggin napalm, just GET RID OF IT. Then I told him about Charlie, and his preference of his BBQ than the live mouse, and how mad I was. Then I stood there holding the phone a foot away from my ear because he was laughing to hard and loud I was afraid I would go deaf. Not long after that we hung up and here I am, writing about the mouse from Hell, and the two useless cats.
Here are the pics....

Please ignore the old cookie sheet the cat food bowls are on, my cats are MESSY eaters who love to scatter food all over creation, so the old pan I never used other than to hold some potted plants that had no drain trays, is now holding kitty food messes. Also..Charlie is eating the last spoonful of Jacks awesome BBQ that was leftover from dinner last night.

So here ya go, pics that prove that A: My cats are useless, and B: that Jack's BBQ is SO good that even half wild cats prefer it over a live friggin mouse right next to their face... 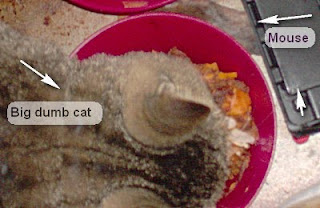 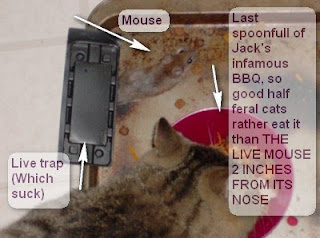 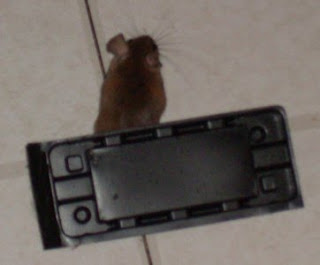 Thar last shot is one I got when the mouse tried to get away from Charlie. Why, I don't know, since that was the safest rat in history at that moment, What cat wants a mouse when there is Jack's Famous BBQ???

So there is my story, and I am sure there will be another update before to long. Hope you enjoyed!

*Music of the Moment: Jump by Van Halen*
Written By Unknown on Tuesday, October 06, 2009

OMG I am laughing my butt off. And that fact you had pics to prove it was classic. I can't wait to tell my ex about it cuz he says that my cat is useless and won't catch mice. But this one takes the cake. LOL

Thanks for the laugh today.

just an idea.. next time he gets his but stuck.. .I would take a pair of thongs... pick up the trap and toss him out the back door..

But, FYI, they don't like the smell of peppermint so some sachets sprinkled liberally with peppermint essential oil around the house and then sprinkling it around the perimeter OUTSIDE the house should deter them....plus, (an added bonus) your house will smell like candy canes..:)

From years of working in barns, I can definitely assure you that the sticky traps are no use -- if you want to go the humane route, try the Mouse Cubes...we had an uninvited guest and escorted him out using one of those...and the peppermint.

Oh my stars that is hilarious...
Love the pics =).

At least think about it this way- that little mouse has gotten his ass hairs yanked out twice in 12 hours!
Also there are live traps that are like little cages. Way better than the sticky pads!

Okay, seriously, I know you're peeved about the mouse...but this is THE FUNNIEST story!!!

And those pictures? Oh my, hysterical!

I have to admit though, I think the mouse is kinda cute. :D

I think I just snorted, I'm laughing so hard! Sorry...!

I love that peppermint idea! I think I'll tell a friend who lives in an older house and has a similar issue.

Hey Bella... I nominated you for the Over The Top Award.. head on over to my page for details... love your blog...

This is hilarious. Congrats on your awards.

Oh my Gods I'm laughing so hard I am going to wake up the entire house. ahahahaha! You are too hysterical, lady.

Oh my!! Your cat is hysterical...falls into the category (sorry the pun) of felines who just don't give a darn!!

Those glue traps freak me out. We used some once and my husband dealt with it all. I couldn't.