So I decided I wanted to make potato soup the other night, but never got the chance to. Then last night I decided I would make potato and corn chowder tonight. It turned into "Potato-corn-ham-and veggie-chowder" lol...

It turned out REALLY good so I thought I would share my recipe. Now I have to say, when I throw something together like this, I do not take exact measurements so bear with me. 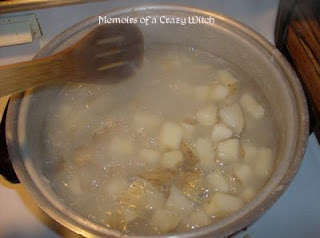 Wash and cube potatoes, cover with water in stock pot. Bring to a gentle boil, cook until tender but not mushy. Drain 3/4 of the water out of the pot. Return to medium heat.

While potatoes are cooking, dice your carrots, onion, celery and ham. 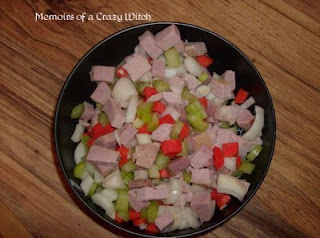 Add chicken broth to the potatoes, followed by the diced veggies,corn, and ham. Return to gentle boil until the carrots are tender but not mushy. 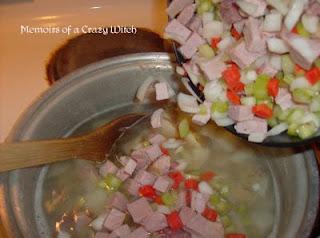 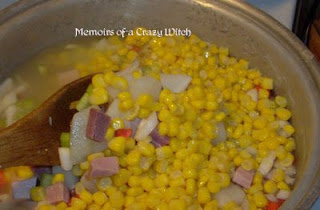 Finally add your milk, cream, butter,and spices, and simmer this for about 30 minutes or until ready to serve. 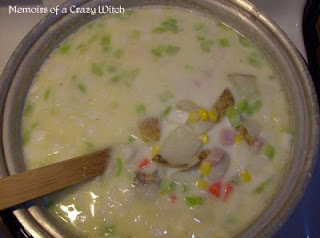 If the chowder is a bit thinner than you like, you can add a little cornstarch and water, or mash a few of the potatoes in the pot, or add a few instant potato flakes until you get the constancy you prefer.

It may not look like much, but it was really hearty and totally nom worthy. 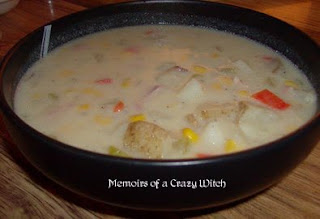 Serve topped with shredded cheese and crackers, and a few dashes of hot sauce for a little kick!
Written By Unknown on Monday, November 30, 2009

Frickin' Yum, Bella. =) I'll be right over to pick up the left overs, I'll even bring my own tupperware. lol

now that looks like a good bowl of chowder....

I'm a chowder addict - this looks way yummy! Thanks for the recipe!

MMmmMMmm...that's exactly the kind of thing I love to cook!

P.s. I'm new to following your blog, so I'm catching up a little. I just want to say: I SO know what you mean regarding friendships and being honest to the point that people often don't want to hear it.

God, that's so me! I try desperately to ask myself what *MY* part is in any current drama that might be going on in my life. I don't delude myself into thinking I don't play some part (and often a BIG part!) in it. I have friends who just can't see that when situations occur again and again, the common denominator is THEM!

If they TRULY want to stop the same dilemna from hurting them, then they obviously need to make different choices, right? Seems logical to you and me, but as you know others have trouble seeing the forest from the trees (as you so eloquently wrote).

I just continue to be honest! I figure, if they don't want my honest thoughts (consciously or unconsciously), then they wouldn't be sharing their stories with me. If they share the story with me, they know how I am and that I'll share my thoughts. I can't force them to follow my thoughts, but when things don't go well after they've handled the same old situation the same old way, I am like you and simply say "that sucks." What I really mean to say is "It sucks that you keep having the same situation and keep responding the same way and getting the same results"

I m glad you all liked the recipe..I think I will make this a regular thing...and thanks for the comments!

Welcome Witchy Mom, and you hit the nail on the head in your comment, that is exactly how I feel as well...

Maybe because we are outside of the situation we can look at it a little more objectively ,but if you keep doing the same stupid stuff over and over again, and ending up in the same place, eventually I am going to tell you what I think and let the chips fall where they may..

I am so glad someone else out there gets that, you just made my day!

Hmm... I don't eat chowder. I know, my brother says that something is absolutely wrong with me. I showed him your recipe and told him I will give it a try. I'll cook it on Saturday, I'll tell you how it went...