I have been taking some much needed time to myself, in light of all the things going on in my life right now. Things are...stable...right now and I am using the brief lull in cosmic shenanigans to rest and regroup.

My father had started to lose his hair from the chemo, so he now sports a shaved head. Being a guy, it is easy for him to not worry about that. He is in good spirits, they have adjusted his meds so he is not so miserable and sick from the radiation and chemo. Other than that, nothing has changed.

My Mom is still pretty exhausted, having to run Dad to all those appointments, but she is hanging in there.

Jack is doing okay after his surgery now. He got an infection from being intubated ( apparently that is not a real word, but whatever. ) during the surgery, resulting in the side of his face being swollen up like he had a baseball in his cheek. He ended up in the hospital overnight, receiving massive doses of a very powerful antibiotic, since they were afraid the infection would travel in his bloodstream to his incision. He went for his post op appointment on the 26th of March, and they gave him a couple of cortisone shots to help with muscle spasms in his back. He is slowly returning to his normal self. He will start physical therapy as soon as Worker's Comp approves it and hopefully in another month or two he will be ready to return to work. I hope.

As for myself, I have been enjoying the lull by reading a lot. I finished reading all three of the Hunger Games trilogy this week. Wonderful, heart wrenching books.

One really cool thing that happened to me is that I won a contest given by one of my favorite authors, Dianne Sylvan. I have all of her "Pagan" books, and I own her two fiction books, Queen of Shadows and Shadowflame. She gave away a copy of her recently released third book, Shadow's Fall, a few days before it hit shelves, and I was lucky enough to win one of the three signed copies that she gave away. To say I was ecstatic was an understatement lol.

So yeah, I have been taking it easy and kind of nurturing myself, trying to gear up for the next round of bullshit that will be thrown my way, since that is how my life works. Just relishing the quiet downtime that has been to long in coming. I am making my inner hermit happy and just hiding out at home, keeping to myself as much as possible, and my soul is thanking me for it.

No news is good news in this case. Drop me a line, a comment, head over to the fan page and say hello. I still love hearing from you all, and I hope you are all well :) 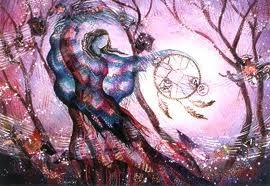