Writers block of course. More like writer's will to be honest. I stay so busy, or so occupied with other things, when I sit down here at the computer these days and even think about blogging, my mind draws a blank.

I find that the more I have to write about, the LESS I want to write. Why does it happen this way? As a writer I should be dying to get the words out, to share the experiences. Instead I find myself guarding them like a child with a most precious plaything...unwilling to share it with anyone.

It has been a whirlwind of activity the last three weeks. I think the last time I posted was right before Samhain, which is when I went into the doctor to get my walking boot officially taken off. That all went off with out a hitch. Hell, I walked 5 miles the day before with NO boot on...not that I told my doctor that. But I did it with no ill after effects other than being tired.

Oh wait, I remember what my last post was about now. My best friend, who had lost her memory. Well she still has not regained it but she is coping much better, most days anyway. Nights are hard, as it is when she gets tired, she gets overwhelmed easily. But she goes day by day and her heart remembers even what her mind does not. You can follow along with her journey HERE if you like. It was a fairly new blog before she lost her memory and there is much more content after she lost it, but there was enough before to see how the stress of daily life and a million other factors that have happened over the last 15 years attributed to her mental vacation ( which is what I call it. )

So back to Samhain, the doc took Xrays and said it all looked wonderful. I do still have two small broken parts in the posterior of the ankle, they are to small to use any screws or plates or anything to fuse them back together, and since they cause little to no pain ( usually none unless something hits me on the ankle or back of the ankle, then I feel every damn splinter lol ) and he showed me in the xrays where the toothpick sized slivers and little porcupine ball of bone fragments were already "bridged" with new bone growth. Meaning there was a shadow between the stable part of my bone and the broken piece of bone, which is the new bone growth making a "bridge" between the undamaged and damaged bone. In other words, I am healing as I should, and in fact a little faster than they expected. I only have one more appointment with them, which is on the 30th of this month and then they will turn me loose unless the hardware bothers me later.

I have a pic of my xray...only one angle though, but it shows the plate and two screws ( well it looks like one screw because of the angle, but there are two there, much to my surprise. I did not know that before. ) If you look on the right, ( which is the left of my ankle lol ) there seems to be a single screw jutting up at an angle into my leg...but there are actually two screws there, one behind the other basically. Funny thing...every time I look at this pic is make the side with the plate ache a bit. The mind does funny things lol. 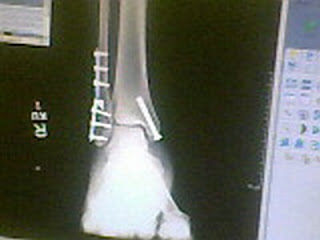 So for the most part I am now left to my own devices, which is fine. It still causes me pain at times, and it still swells, but it will swell for at least a year he said, and as far as pain, well, every time it rains or gets really cold, I am in for a ride, which I already have experienced. I can tell you it is going to rain three days before a drop ever falls lol. I am back to normal for the most part though. I do move a little slower, a little more carefully...but I am told this is normal and the more time that passes from the day I got hurt, the less it will bother me. One day I might not even think about my ankle, like I used to not think about it before I got hurt lol.

Since I walked in the breast cancer walk, weekends have been non stop, on the go action kind of weekends. The weekend after the walk we went to the St. Marks River lighthouse and watched the Monarch butterflies migrate, and we walked about 5 miles that day, me with no boot on. I was very proud of myself. 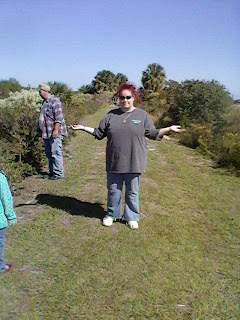 Here is a pic of the St. Marks lighthouse. It has history. Look it up lol. 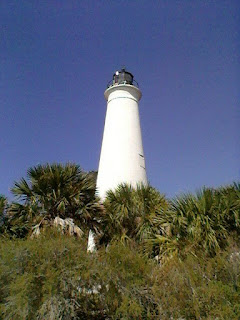 Later that same day we went down to the other side of the bay and went to the old fort which is the
San Marcos de Apalache Historic State Park. History there too.

The weekends since then have been filled with trips to the mail, and out to eat, and grocery shopping, and walking around the flea market. We all bought some new PS3 games so Jack has been playing the new Midnight Club racing game, Perth and myself play Skyrim, ( Oh yes, we have Skyrim, got it the day it came out lol ) and I am playing Grand Theft Auto 4 when I feel up to it.

I have not been playing much of anything for the last several days though, because I have the flu. Nasty, icky, shoot me now please, flu. So I have spent the last few days moaning about how shitty I feel to everyone who will listen lol. Jack even cooked last night. I just do not have the energy to stand up longer than a minute or two without feeling like I am going to pass out, so I just stay on the couch or in the bed or here in my chair. I feel different today though. Not better, just different. Yesterday I had sinuses clogged up so bad I felt like I was slowly suffocating to death, and today I can breathe better but my fever is up to 101, and it was only 99.4 yesterday. I will take hot and cold flashes over not being able to breathe any day lol.

I think that sums it up for now, It is a readers digest version, I know, but my energy is running out on me and I need to go rest for  a while. As these things usually happen, now that I have gotten over the hump of actually writing a post after not writing for a few days, that block will go away and I will be back more frequently. Once I stop feeling like ass that is.....

Written By Unknown on Wednesday, November 16, 2011

Watch the barometric pressure and see if your ankle reacts to it. I have arthritis in my back and can really feel it when the pressure raises or drops quickly.

When you have problems breathing, try some cough drops with menthol. I have allergies and sometimes I can hardly breathe either because of mucus or just swelling of tissue. These seem to help whether there is a cough involved or not.