I have so much to write about, so many ideas bouncing around in my head that I hardly know where to start.

My mind has been racing for days with ideas for the overhaul I am about to do on the house, for the blog, for things I want to create, things I want to do on the fan page. I have been trying to write them all down as they come to me, but as they tend to hit me at night when I am trying to go to sleep, that can be hard to do at times. I do not have a nightstand or anything, so keeping a little notepad is out of the question for now. BUT, I am about to move my bed, so once I do that, I will have room for a little table. Right now my side of the bed is against one of the walls.

Anyway, there are sooo many things I am going to be doing. I have decided to make the month of February a "Project Month." I am going to spend all of this month working on the house. Moving things, redecorating ( with things I already have ) painting, and getting things "right."

We finished the bulk of the kitchen table and chairs Monday and brought them in the house. I still have to paint the tiles on the top, but that is an inside the house job as I need it to be climate controlled for this particular paint to dry quickly. I am so thrilled with the table already. It has been so nice to sit here and eat together, and to have work space other than my desk and the very limited counter space I have here. Once I paint the tiles, which will be this weekend I think, I will do a dedicated post just for it instead of throwing a few pics of it in to this post. I want to be able to post them all at once so you can all see it from start to finish. I am really proud of us, it looks great and it really made the house feel so much different. More homey. It made me want to do so many other things. Hence the project month.

I will have to do most of it myself, as Jack is unable to do much still. He had two back to back MRI's today, one with contrast dye and one without. The radiation makes him really sick, so he was not feeling well at all when he got out of there. I had to drive home. We stopped at a grocery store and spent the last 22 dollars to our name to get a little food to hopefully get us through till the 9th when my stamps come in, but 22 bucks does not go very far these days. This month sucked, as we had to renew our insurance policy and renew the tag on the truck this month. We had to get an extension on our light bill, as we could not afford it. We will probably not be able to afford it on the 14th, which is when it is now due either, especially since our rent has been raised...but at least we have power until then. I have borrowed all I can borrow and asked everyone I can ask, so there just is no where else to turn.

So instead of dwelling on what I can not change, I will work on what I CAN change.

On to other things, Vickie at Aoibheal's Lair, who was participating in the Ten Things Thursday with me, has decided to move on and stop doing the Thursday post. She said she feels it is time to move on, and that it is hard coming up with a theme each week. I totally agree with her on this. Even though I "created" the weekly meme, I, too, find it increasingly hard to find ten things to write about in such a manner. So while I am not going to stop doing it totally, I am no longer going to try to do it weekly. ( Not that I have managed to do so in the last few weeks anyway LOL ) Now I will do it when the mood strikes me. I am also tossing around ideas in my head for a couple of new segments here on the blog. Not an every week thing, because I have learned that my life will almost always prevent me from posting when I am "supposed" to, so I will post them on the day they are named for when I get the chance. I have beaten myself up emotionally over my blog so much, because I feel like I should be here every second of every day, writing away, when the reality is I have to write as time and circumstance allow. I have noticed that when I stop bullying myself about it, I tend to write more, and the words come a lot easier than if I am screaming at myself that I should be writing.

I feel big changes coming. I hope that some of them are good for once. 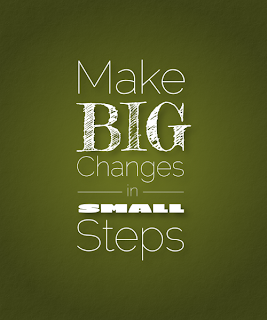