Evil Virus of Doom...and other things.

Alex and I have been plagued with some terrible virus for the past week. Alex came home Friday with 104 temperature, and Saturday she had a terrible sore throat. I also started coming down with it on Saturday, and Sunday, Mother's Day, we were in the ER getting strep tests.

Luckily, they were negative, but that did not stop the horrible and searing throat pain. We were both unable to eat more than a few bites for three days, and Alex's fever stayed in the 103-104 range for three days. Finally on Thursday it broke to under 100 and stayed there, and I was able to start eating again. She has been fever free for 48 hours now, and can talk and eat with ease again. 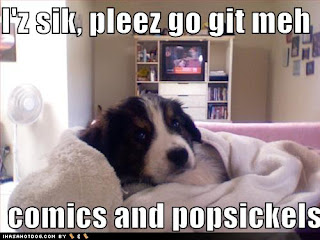 All Alex could eat was Popsicles for two days.


Alex has never been so sick in her 8 years. It was very scary for me. She would not eat, could hardly drink, and did not say a word for three days. As most know, Alex is a talker. She talks NON-stop all the time. Yet nothing but head nods and shakes for three days. The few bites of food she would eat I had to feed her like a baby bird. She was so weak she could hardly sit up, much less feed herself.

Jack was very kind, he pretty much ran the house for the week. I was in bed for two days, only getting up to use the bathroom. He cooked and did dishes and got us anything we needed. It was very nice.

I did the dishes and ran the vac today, for the first time in a week, and tomorrow I am going to cook a real meal. We have been living off of broths and soups, as it was so painful to swallow anything, and we are all ready for something more substantial. So I intend to make steak tacos, and I have a giant seedless watermelon in the fridge chilling for dessert. I have been craving the melon like crazy for the last couple of months. I blame it on longing for Summer. ( Try not to gasp in shock over the fact I am longing for Summer lol ) It is the middle of May and we have had a few nights of upper 30's and low 40's. In Florida. I am still wearing jeans most of the time. My shorts sit in the drawers...waiting to see the light of day.

In other news, there are two weeks of school left, and even though we were so sick, it was nice not having to worry about living life by the clock for the past week. Sleeping when we wanted, waking when we felt like it. No rush to eat dinner and do dishes, or make sure laundry was done for the school week. I am really looking forward to a couple of months of that.

Also, we have been given a mediation date with Jack's former employers. It is set for the second week in July. Of course, I can not give any detail, but hopefully this hellish 2 year period of doom will all be over soon, in our favor. Jack had a doctor visit this week and the doc said he should have a fusion. Jack told him " No, thank you." The doc also told Jack that he was a record breaker. The Doc had never operated on one person 4 times in a row in such a short amount of time. Hell of a thing to be a record holder on, eh? There will be no more surgeries unless the alternative is to end up in a wheelchair forever. They keep hacking on him and he is still not fixed, and he is just done with it. There has been no improvements,  so now he just wants pain management and to settle, so we can move on with our lives.

So hopefully, soon we will come to the light at the end of this long, dark tunnel we have been navigating.

Oh yeah, my birthday! I turned 34 on May 4th, and my Mom and older kids surprised me by taking us all out to dinner at Outback. It was scrumptious, and it was nice to be gathered with my family. The only down side was it was graduation weekend for FSU and FAMU, so the place was packed and very loud, which made talking almost impossible. One we got back to Mom's, I saw that she had made me one of her delicious cakes, which I adore. They also got me a humorous birthday card, with a sexy shirtless guy in it, and he sang happy birthday to me, but you had to rub his abs to get him to do it, and he was ticklish, so he giggled while he sang. It cracked me up. All in all, it was a very nice birthday, the best I have had in a very long time. I still smile when I think about it.

Mother's Day was a wash, due to us being sick, but Saturday, the day before, Jack made a great dinner and did the dishes, so it all worked out. He and Alex also got me a card each, and Alex also made me a handmade card. They both made me cry, they wrote such sweet things in them. It warmed my heart. They drive me crazy sometimes, but I know they love me, and I love them.

I think that is about it for now. My "short" post ended up being a little longer than I intended, but a lot has transpired since I last wrote lol.

So I will end  here, and I hope you all have a fabulous weekend!

P.S. I am still looking for questions for my 'Ask Me Anything' segment. I only have a couple, and I am really wanting to do this. So please, send your questions in. Click the graphic in the upper corner of the left sidebar to be taken to the post with the details! Thank you! :D