I have only skimmed most of the Samhain themed posts here unless they had personal stories attached to them...so feel free to skim this one as it has nothing to do with me...that one will come later..... I actually was not going to post about the typical "What is Samhain and Why is it Important to Us" deal...but I saw this and wanted to share....if anyone else has posted this I am sorry.. 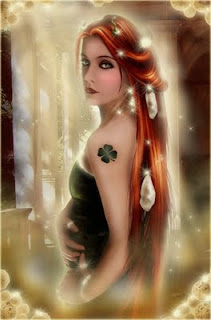 Samhain is popularly known today as Halloween, a contraction of the words "Hallowed Evening", and it retains much of the original form and meaning it had long ago in Celtic lands, despite the efforts of the Church to turn it into an observance of feasting and prayer for their vast pantheon of saints.  The Church began calling it Michaelmas, the Feast day of St. Michael, but the old Samhain holiday proved to be too potent a drawing card for one lone saint to combat.  So it was renamed The Eve of All Saints, or All Hallows Eve, which precedes All Saint's Day, and is still one of the holiest days in Catholicism.

The pagan Samhain is not, and never was, associated with evil or negativity.  It has always been a time to reaffirm our belief in the Oneness of all spirits, and in our firm resolution that physical death is not the final act of existence.  Though death is very much a part of Samhain's symbolism, this Sabbat also celebrates the triumph of life over death.

While it is true that Samhain is no more evil than any other holiday, it is also a fact that evil does exist, and pagans have always been aware of this.  Our ancestors sought to protect themselves on this night by carving faces in vegetables to place near windows or at the perimeters of their circle.  These were the forerunners of our present day jack-o-lanterns.  These carved pumpkin faces are probably relics of the even earlier custom of placing candles in windows to guide the Earth-walking spirits along their way.  Today it is still a custom in  to place candles in the windows on Samhain night and to leave plates of food for the visiting spirits.

There are two possible sources for the origin of the Samhain Sabbat's name.  One is from the Aryan God of Death, Samana, and the other is from the Irish Gaelic word "samhraidhreadh" , which literally means "the Summer's' end".  Samhain marked the end of summer and the beginning of Winter for the Celts, with the day after Samhain being the official date of the Celtic New Year.  The reason the Celts chose this point in time as their new year rather than Yule, when the rest of Western pagans celebrate it, was because the sun is at its lowest point on the horizon as measured by the ancient standing stones of and .

This is also a time for harmless pranks, lavish feasting, circle games, and merrymaking which can be teasingly blamed on nearby spirits ;)  ( Loki, Abbot, Lord of Misrule etc.)

Samhain bonfires, called balefires in paganism, were once lighted on every hilltop in and as soon as the sun set on October 30. The word "balefire" comes from the word "boon", which means "extra".  The fires serve the purpose of containing the energy of the dead god, lighting the dark night, warding off evil, ushering in the light of the New Year, purifying the ritual space or home, and being the focus of ritual. In many parts of the these balefires are still lighted on Samhain to honor the old ways.

The idea that evil spirits walk the earth at Samhain is a misinterpretation of the pagan belief  that the veil of consciousness which separates the land of the living from the land of the dead is at its thinnest on this night.  This does not mean that hordes of evil entities cross this chasm. Some pagans believe this veil is made thin by the God's passing through it into the Land of the Dead, and that he will, for the sake of his people, attempt to hold back any spirits crossing into the physical plane whose intent it is to make trouble. In nearly all the Western pagan traditions, deceased ancestors and other friendly spirits are invited to join the Sabbat festivities, and be reunited with loved ones who are otherwise separated by time and dimensions of existence.

Some modern scholars claim that Samhain's traditional 'Trick or Treat custom was derived from a ploy to scare away fairies and other mischievous spirits, but it has overtones of being a custom of a much later period, perhaps one which grew up around the Burning Times. During the Burning Times, masking and dark clothing hid the identities of witches going to their covens so that they might escape detection.

The mask also had the added benefit of frightening away any inquisitor who might happen upon a lone figure in the woods.

Email ThisBlogThis!Share to TwitterShare to FacebookShare to Pinterest
Tags: Religion and Spirituality, Samhain

I enjoyed reading that!

Wishing you Samhain blessings for the upcoming weekend

This was seriously one of the best historical references of Samhain I've read so far.