One step forward and two steps back...

So I have to go back to the doctor tomorrow. The incision over the plate in my leg has possibly become infected and is very painful. I was hoping that maybe I had just over done it, but even with rest it has gotten worse and more painful. I ruled out infection because it has been so long since I had surgery, but after doing some research last night, I found out it is possible to develop an infection at any time, even with excellent external care. Infections can still happen internally. My incision is very red, and hard and hot to the touch, and I have this weird egg shaped swelling below the ankle bone on that side, and now the rest of the foot is swelling and elevation and other anti-swelling measures are not helping.

So tomorrow I have an appointment with my doc at 11:30 in the morning. I am hoping it is nothing serious. It is frustrating, because I have NO internal pain at all, I can walk with no pain inside, but any pressure on the skin is agony. I have had to have my boot off most of the day, even though I am not supposed to yet, because the pressure of the boot is just to much to bear. I am not walking without the boot of course, so no need to worry about that. I do not know if I did to much to soon, or if, as Perth suggested, with me walking and using the muscle, it might have driven infection from inside the muscle to the surface. Not sure if that is possible, but it sounds plausible. I am really hoping that egg shaped swelling is not a big pocket of infection. I am assuming they will take another set of x-rays to see if anything has changed in there. I am not sure if infection can show up on an x-ray, but if it can, I hope they can spot it if that is the case. I fully expect to be put on antibiotics, and I am really hoping they do not want to stick a needle in that egg to drain it to see if it is infected. As tender as my skin is right there, that would be just agony. It started bothering me Saturday, and I was hoping that it would go away since I have rested for two days, but it is getting worse. I have had to start taking my pain pills again and it had been several days since I have needed to do so. I am trying to not be scared, and to not be frustrated...I just hope it is something easy to fix and will not require them to recast or go back in there and fix or remove anything. The other side of my foot is doing fine, the incision looks good and is not really painful, other than from the swelling making the whole foot puffy and sore due to the skin stretching.

I took it easy today, other than getting Alex on and off the bus, and I made lunch and dinner. I sat on the couch most of the day, watching Season of the Witch ( which was okay but not what I expected ) and the first episode of the first season of Sister Wives ( which should be interesting ). Perth and I had some yummy chicken stir fry for lunch, and I made sub par baked spaghetti for dinner. It was not as good as it usually is, my seasoning was off on the sauce so it was rather bland, but I was hurting by then and just wanted to sit down, plus I made more noodles than usual since Perth eats like a horse ( which makes me happy, considering he has had to eat out of a box for he last year and a half ) and I think it was to much for the amount of sauce I had made, so it watered the flavor down. I kept apologizing, as it was no where near up to snuff, but they liked it for the most part.

Jack says that they are going to tell me to stop doing so much, that I overdid it, which is possible. It just sucks because the bones feel fine, no pain inside at all, so I am really confused as to why this has happened. I wonder if the boot itself is the problem. The constant rubbing of the skin and the compression of the ankle, making it square for awhile after the boot comes off might be doing some damage to it internally. Or maybe I came off the crutches to soon, even though I am allowed to put as much weight as I am comfortable with on it. To many speculations and not enough answers. Hopefully tomorrow I will know more.I will update tomorrow evening and let every one know how it went! Below is a pic of the painful side. I know the angle is bad, but that swelling under my ankle is prominent and egg shaped. My foot has not swollen that like in a couple of weeks so it is alarming for me. 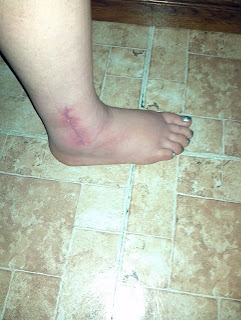 Hello!
Oh you poor thing! I hope the doc can offer some help with your ankle. I had osteomylitis in my spine (bone infection)and I hope they caught it before your infection becomes that infection. I think that nowadays med professionals are typically pretty savvy and vigilant about it as a post surgical complication so I won't treat you to my tale of medical drama (mind wasn't a post surgical thing it was a complete surprise, so it went on for almost a month before it was caught and I had way more symptoms than just pain with contact, so I'm hopeful for you). I'm sending positive healing thoughts out into the universe for you and your ankle!
Hope I haven't freaked you out (fruck you out?). Hope the visit goes well and that you just have a crankle (cranky ankle) that is just crying it out and will feel like a happy ankle soon!
Before I jam my foot further down my gullet, I'm going to go to sleep.
It's a pleasure meeting you!
***healing thoughts***
Bek aka Accidentalthong.com/TheHappyAspie.com

I am in pain with you. My Gods the foot is huge! It doesn't "look" infected to me from what I can see, but I can't see it that closely. I'll be sending energy your way and hoping that it isn't. Take it easy, girl. <3

Sending healthy thoughts and healing energy. I am sure it is nothing and everything will be okay. Try not to worry to much.