Oh Jake. How you have grown....crazy. 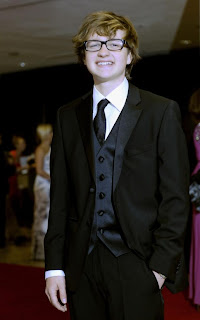 
Good morning everyone! I came across this article this morning. Angus T. Jones, who has played the character of Jake Harper on the show Two and a Half Men since we was 10....9 years now...has declared the show that pays him 8 MILLION dollars a year to be "filth." He found religion...although from the articles I have found it sounds more like brainwashed to me...but then after watching the video attached to THIS article, he DOES seem to be sincere, and if he has found his spiritual place, then more power to him, I am thrilled for him.

(For the record, I am a HUGE fan of the show during the Charlie Sheen years. Ashton Kutcher is okay...but he is not Charlie. However, Jake was always my favorite character other than Charlie, especially the older he got. )

The problem I have is this: Angus found his version of God. That is fantastic. However, when you go on camera and publicly denounce the work that makes you one of the highest paid teen actors, raking in 8 Million bucks a year; calling it "filth" and telling people not to watch it, due to it being a "tool of Satan" ( Really? Come on now. ) and then saying you will STAY on the show for the next season because "God obviously has a plan for him", and that involves raking in another $350,000 per EPISODE....I have issues with that.

The issue is this: If you feel that way in your heart of hearts, if you feel that what you are doing is filth and corrupts minds and apparently is ( according to him ) a way for Satan to win...then you need to leave whatever it is that you are doing. Contract be damned, ( Charlie had a contract too, we see how fast Chuck Lorre worked to get rid of Charlie ) if you feel THAT strongly about something, if you really feel that it is against your very SOUL, then there is no contract in the world that would keep me doing whatever it was I was doing. No amount of money, no anything. If I felt my very soul was in danger, if I felt I were corrupting others with my work, then I would LEAVE.

So to me, that says Angus SAID he is concerned about what happens to him after he croaks, but not enough to actually leave the "filth" that rakes in several million a year.

That leaves me less than convinced about his sincerity.

I am interested in seeing how Chuck Lorre will handle this development, since when Charlie starting blasting the show, they wrote him off in a most violent manner. ( They threw him in front of a subway train, blasting him to bits. ) Will Jake meet an equally grisly demise? They have him in the Army on the show right now. Killed in combat maybe?  With two of the original key characters out of and soon to be out of the show, how much longer can Two and a Half Men really last?

I love me some JAKE! I am with you on this and I think that if that is how you honestly believe then you should turn in your walking papers immediately.

I know right? If you feel what you do puts your very soul in danger, it is time to leave, contract or not.

I love Jake too, he is the only reason I kept watching the show after Charlie left.