B is for Balance: Pagan Blog Project Week 3

Good Friday afternoon everyone! I know I missed the second week of the "A" period, but the last week and a half has been pretty hectic for me, and I was not in the right frame of mind to write. I may do a catch up post about it. This week is all about the letter B, and I chose the topic of Balance, as it is something that I will be working on this year, not only mentally, emotionally and physically, but spiritually as well,  so it pertains to my being a Pagan.

As anyone who has known me for longer than five minutes can tell you, I am a very logical person. Emotions bother me, even good ones. I do not know how to handle them properly, and  because of that, I rather deal with the cold, hard facts, as those are irrefutable, and there is nothing to guess at. This is the way it is, and that is that, so to speak.

This has been fine for the most part, it has served me well, and in fact has actually been a lifesaver of sorts. While it is true I was not overcome with joy about much, at the same time I was not afflicted with soul crushing despair either. As I age, I find that I can no longer be as detached and strictly logical as well  as I used to. This is scary and slightly annoying at the same time, because I am so ill prepared to deal with these emotions that will no longer be ignored. Last year was one of the hardest in my life, with so many heart wrenching events taking place, and because I had no idea how to process and deal with them, I was nothing short of a wreck. I was afraid to speak out loud to people, not only because of my nerve/stutter issues, but because it was very likely I would burst into tears for no reason. I think I have been fighting tears over everything for a year now. It does not matter if it is good news, bad news, a commercial on TV, a song playing..I dropped a spoon or something, it causes me to start crying  my eyes out. I felt like I was going insane. Jack was pretty sure I was going insane as well, and he always seemed to be looking at  me like he was afraid I would break down. It is tough.

I let my sense of spirituality pretty much die off in the last year as well. I felt so alone, and like there was nothing divine out there, because if there were, how could the Universe take my Father away from me? How could it leave us with such a massive loss in our lives? How could I believe in anything good when I was being hit with one bad thing after another? It is one thing to roll with the punches, pick yourself up and dust yourself off, but in reality, something can hit you hard enough to knock your ass out. I was angry and bitter, sad and distraught. I laughed so rarely, that when it did happen, I would literally choke on it, and start coughing. It was as if my body could not remember how to laugh, and treated it as something foreign.

I went from being logical and detached to a blubbering mess. I was at the total opposite end of the spectrum.

I can no longer function this way, so I have to achieve some sort of balance. I have to learn how to process the emotions, to let myself feel them, and to get past them. I want to be happy about things. I want to feel satisfied. I have been cleaning like mad, flitting around from task to task, almost as if I were in a manic episode. Yet nothing I did satisfied me. I could not sit still. I was always doing something, but there was no sense of accomplishment at the end of it. Nothing felt "done." That will cause a burnout very quickly.

I have realized that being unable to "feel" anything in a healthy way has directly affected my spirituality. The more I spiraled out of mental and emotional control, the more I felt my sense of spirituality recede. After stepping outside of myself to try to gain a little perspective, I remembered that the Universe ( or whatever form of divinity you subscribe to ) is not going to magically fix all my problems for me. I have to do the work myself, taking the initiative, putting forth the effort, and the Universe will respond and make sure that those efforts are supported. Being out of balance causes me to feel lonely and removed from everyone. I am no longer willing to let myself feel that way day after day. 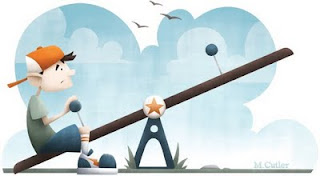 I understand that my natural defense mechanism is to retreat into logic to shut out the emotions because that is part of what is making me uncomfortable. What I have to learn is to not do that, to allow myself to feel whatever it is I need to feel...even if that means letting myself be hurt or disappointed. I have also come to understand that is easier to let myself feel "bad' emotions, such as hurt,sadness or some sort of pain, then it is to allow myself to feel "good" emotions, such  as happiness, joy, elation, excitement, desire and things like that. The only "good" emotion I have no trouble with is love. It was not always this way, but now I have no problem telling the people I care about that I love them, and mean every bit of it. Even more so after losing  my Dad. I would give just about anything in this world to be able to see him in front of me so I could hug him and tell him just how much I loved him, and always have, even when we were not always getting along.

So one of my goals for this year ( and well beyond I am sure ) is to try to work on achieving a more balanced life. That means finding balance between emotions and logic, work and rest, spiritual and secular, alone time and social activities ( hint: the problem will be social activities. 99% of my friends are online due to location ) and everything in between. As a bi-polar person, I know from experience that ping ponging all over the place is not a good thing, which is one of the reasons I kept myself so locked down for so many years, but apparently it is time to change that, and learn how to process instead of pretending they don't exist.

I will be making a schedule for myself, which may sound strange as I am at home all the time, but I still have work to do here, and I as I intend to work on my spiritual studies and try to write more, if I schedule the time for that, it should be easier to stick to, in theory. That also means less time on Facebook. I would never stop totally, as that is how I communicate with most of my friends and family, but these time sucker games and whatnot will be taking a backseat. I will play them for relaxation, not all day or night, making it feel like a job, and one with no payout to boot. Housework, cooking, writing, studying...they may not pay anything monetarily, but I still have something to show for them. They serve a greater purpose.

People might not like my new schedule, and my new plans, but I have to do this for ME, and indirectly for my family.

So there you have it. Do you have a good balance in life, or are there things you need to work on? Do you have a hard time with certain aspects of your life? Tell me about them!

As a side note, today would have been my Father's 70th birthday, and it is the first one he has not been here for. This is basically the last of the "firsts" of the first year after losing someone. I have been through the first father's day, the first holiday season, and now the first birthday since his passing. I pray it gets easier from here. I love and miss you Daddy. Happy Birthday.

Happy Birthday to your dad (lovely tribute!) and I am so proud of you for taking control of your life and owning it the way you want it to be. Congratulations, darlin!!

i can very much relate to the logical-minded, minimal emotion way of being. i have found that being such a rational creature has inhibited my ability to be open to spiritual experiences & i too must strive, always & onward towards balance.
as for you, crisis & complete loss of control has shown me the opposite. i suppose the gift of those difficult lessons is the light it sheds upon our Selves. when we choose to take heed of these lessons we can become so much more, better still, we can share so much more.
all the best to you in seeking that balance. 20 years now & i am still trying to figure it out. helpful hints are welcome. ;)