The Mouse, the Moth and the Snake...

What the hell?!! It is varmint week here in Florida or what??

For starters, I have been plagued by a wood rat in my house for the last few days. I have never knowingly had a mouse in any of my homes before, so this vexes me. He is LOUD, and quick. My cat, who shall forever be known as Useless Friggen Cat, or UFC ( ha ha ) watches the mouse very intently, but can not be bothered to actually MOVE off his fat ass to go chase it or anything lol. Total Garfield moment I swear.

Secondly, I am terrified of Lunar Moths. Scared. to. death. They are great big creepy condoresque dive bombing...things. I have no clue how they reproduce or anything, but there is a massive amount of Lunar Moth Babies ALL OVER THE PLACE outside. Every time I open the door after 5 P.M. they swarm me lol.
Friday night 4 of them got in and flew right in my bedroom. Keep in mind a "baby" Lunar moth is still almost three inches across and about two inches long. So I ran in here ( I was standing by the back door ) and Jack then spent the next 30 minutes chasing them down and getting them out of my room. He tossed them all back outside, alive.

Last but not least, I woke up from a nice dream this morning to the sound of Jack saying " Sweety? Sweety? Wake up babe.." ( I should have known to just burrow under the covers when I heard back to back terms of endearment lol...)

When I opened my eyes...THIS is what I saw: 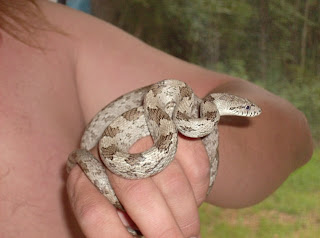 Yes folks, Jack was standing beside my bed holding a 3 foot long oak snake. After I stood up on the floor on the opposite side of the bed, I asked him wtf was he bringing a snake in the house for. He said as he was working on his project that he saw something move on the cheery tree we had to cut down a couple months ago because it was at risk of falling on the house, saw it was a young snake and was concerned because it was just after dawn and cold out...not a time when snakes crawl around. So he went and checked it out, and figured it's den was disturbed so it was looking for somewhere to hide. Of course he had to come share lol.

So I am covered in woodland creatures this week lol.

Other than that, it has been an awesome week. The temps were down in the upper 50's at night, and a tolerable low 80's during the day, meaning I got to open the house up for a whole week! I did some cleaning and cooked some good meals and recharged my batteries lol. I had to turn the air back on tonight because it was hot and super muggy again, with rain moving back in until the coming weekend. But the week was enough to tide me over until the days and nights are cool all the time!

The "project" Jack was working on was a drop screen cover for the back door. There is no screen door on the back, and I like to have it open, but flies and bugs get in and I hate that. A fly will drive me INSANE in a heartbeat. So he spent all this morning taking the extra screen he had left over after repairing some of the windows on the house and sewed a lot of them together and attached it to the inside of the door frame, and tied weights to the bottom to keep it closed. So now I have a screen panel on the back door so I can have it open and not have to worry about critters coming in! He spent hours on it and I was thrilled! So very sweet of him!

He smoked another ham Saturday after he got off work ( he had to work half a day, usually he is off on weekends but his boss has been ill this week ) and it was just as good as the one last week. He is the grill and smoker king let me tell you lol. Today he made the leftovers into BBQ, just like last week, for the race, and it was even better than last week! If this is the typical weekend menu, I am ok with that lol. It was divine!

We watched the race, but I got bored, the two people I really like were not driving well at all today, and the guy Jack likes blew an engine about halfway into the race, so I got up and started cleaning a little. Washed some clothes, worked on Alex's room some ( and I am still alive to tell you about it yay! ) and little stuff like dishes and what not.

Later, Jack and I were talking, ( I swear we have talked more this weekend than we have in a couple of months lol. ) and he volunteered to start walking with me again. I used to walk every afternoon after he got home from work, but a woman went missing from near here and was eventually found murdered, and even though they caught the guy, it still freaked me out because there were a couple of other incidents not to far from here, so I did not want to walk alone. We talked about this today and he agreed to start walking with me which makes me SO happy! We both need to get in better shape, and the road right next to us is very long, dirt, and very beautiful. The first 3 miles of it has NO houses on it, which is the end that is near us. Hence another reason of me being spooked, nothing but woods all around. It is gorgeous though, and I have taken some great pics from that road. I can not wait to start back!

All in all it has been a great week and a awesome weekend. Jack and I spent a lot of quality time together and talked so much. We were really close and that does not get to happen as often as we want due to everyday life getting in the way. Not to mention an almost 5 year old who has to insert herself in the middle of any type of affection lol.

Speaking of Alex, she will be 5 on the 15th of this month, so I have to get started on planning her birthday.

I am also going through an "unplugged" stage. I belonged to a lot of Yahoo Groups, and I left all of them except 3, 2 that I have been a part of for a long time, and one that I own. I have realized a few of the people I had on my FB and other stuff really annoyed the crap out of me and I have either gotten rid of them or I am about to, and with the exception of my blog ( and all of your blogs that I read of course ) and the handful of people I talk to, I just have really wanted to get away from a lot of the things I surrounded myself with before, and focus on me and the things that need attending to in MY life, instead of being so involved and worried about every one else's problems, and making them my own.I know that sounds a bit selfish, but everyone who has talked to me regularly over the last year knows that everything else has always taken precedence over me, and sometimes even my family, and that has to stop. Us first, then everyone else. Since I started doing that, things have gotten a lot better for me, and really well for Jack and myself. There is more to that story, but that is another post all by itself lol.

So there is my week, and what has been going on with me while I have been away. I hope everyone has a great week!
Written By Unknown on Monday, October 05, 2009

Good for you, for taking care of yourself - you absolutely should! And it's not selfish!

I can relate to the moth thing. Snakes don't bother me, but giant flying bugs....eek!

Self-care is NOT selfish..*sigh*..we women have such a hard time with that...:(

Ha! We had a squirrel in our house yesterday afternoon...she's one we feed outside, well I guess she figured there must be a giant pile of peanuts somewhere in here 'cos when Savannah opened the door to go out, Bushy dashed in. Mayhem and pandemonium, let me tell you....dogs freakin', cats freakin', me freakin'....managed to shoo her out safely....

Get the unplugged thing too....totally...

PS. Left you something..

WOW what a week you have had huh? That is insane, the snake I would be hiding in a closet or on the ceiling I am terrified of them. I am glad you have had some time to talk to Jack that is awesome, I am also happy you had time to reflect on yourself and your happiness ie" relationships. You are a remarkable woman my dear friend and I am proud to call you my friend and sister.

The snake is cute =). And if it were a bit bigger it could have taken care of that rat for you, lol.
The unplugged thing works. I do it a lot, only usually with phone and in person contact.
Good for you to be taking the steps you need to make YOUR life what you want it to be!

I'm not sure I know what a lunar moth is, but it sounds scary...and big!

And that snake is so cute!!! I can't help myself, I actually like snakes. And tarantulas. :D

Sounds like you live in a lovely place! My parents have no neighbors for over a mile. That's how I grew up, and it's what I like now. Of course, I live in a townhouse with people everywhere. Blah.

As for focusing on your and your family...that's the thing to do, GF.

Nobody will think you're selfish for doing that, I promise.

Glad you've had such a good week. And I'll be down next weekend for some ham. LOL