Hooray for Fairy GodChicks, and a long post about stuff...

I am very pleased to announce that I will not be without my Internet after all, thanks to a Fairy GodChick that I am most grateful for. She swooped in and rescued me in the 11th hour, and I can not thank her enough!

I know that I have not posted real stuff in forever, but it has been a crazy couple of weeks, with Alex and myself being sick, my mom is still in the hospital, and Thanksgiving is only a couple of days away, and my parents are probably pissed at me. I got VERY ill the very next day after bringing my mom's obviously germ infested Jeep home from the doctors office. ( I was fine that day, and after driving her vehicle, I wake up the very next morning dying from chest congestion, the very same thing she was in the hospital for.. Not a coincidence. ) But it hit me so hard and so fast, and I was coughing my lungs up, I lost my voice by the next day. I just started getting my voice back yesterday, but it is a very low whisper and if I try to talk louder, my voice cracks and it goes back out. This means I have not been able to call and check on my mom, or talk to dad. I have been talking to my eldest on the computer and getting updates. But I know my parents, and it does not matter that I was horribly ill, they will still end up being pissed that I did not do whatever they thought I should have been doing. They are just that way. My Dad even told Jack it was not their fault I was sick, I obviously must have gotten it from Jack, who was sick two weeks ago, and the fact I had my hands alllll over my moms germ infested steering wheel has nothing to do with it. So this means either Thanksgiving will not happen until later, if my mom even gets to come home tomorrow, or that my Dad will expect me to get there and help cook everything.....which I do not feel up for. My Dad is a tyrant in the kitchen and nothing you do is good enough and he yells and it is just not something I want to deal with. In fact, I honestly want to stay home.

I was just talking to Jack about this tonight. We were watching House tonight ( well he sort of was..he was making us Butterscotch and Chocolate Chip Cookies ) and a Thanksgiving commercial came on. I think it was Publix or something but anyway it was about several families about to sit down to dinner and the heads of the families were standing up and telling their family members how grateful they were to have them there and how happy they were to share the meal with friends...you know, the usual family blessings and stuff. Well I said that I might look forward to Holidays more if I had a family like that, instead of having one that freaked out about cooking, stressed out the entire time they cooked, and leading to dinner, then it was hurry up and scarf down what took two days to cook so we could start the massive job of cleaning it up and sending everyone home to get the hell out of their hair. Then I said that was not totally true, because when I was a kid, we ate with the neighbors on a couple of occasions, and my "Uncle Dick" ( I grew up with these people, they were my aunts and uncles of choice ) used to stand up and say a blessing, and how thankful he was that we all came together to share good food and company. At the time it was cheesy and I just wanted to dig into that awesome food, but looking back...I really miss it.

Now it is not a joyous occasion at all. My Dad is a grump who bitches about everything, and my mom stresses out about it all ( which my Dad just adds to ) and usually ends up in the hospital or laid out in bed, unable to breathe. If I had a house big enough to entertain, I would totally cook here for my parents and older kids, and start a new tradition, but I live in a tiny place. The kitchen table is my desk, we eat in the living room lol. But now I also want to just stay home with my little family unit and do it our way. Cooking together, happy, watching movies, listening to music. Being totally relaxed and happy. Not the neurotic mess it usually ends up being. But I have my elder two kids to think about, and spending it with them, is more important than what I want. I just hate that it will be yet another tense year. Don't even get me started on Christmas.

Jack feels the same way. When he was a kid, and his grandparents were alive, the holidays were a great time, family and food and fun...and then as he got older, family feuds and such after the grandparents passed away split the family into sectors, and it was never the same. Now he does not interact with his family and the only ones I talk to are my parents. It is just sad.

Anyway, enough about that. I want to show ya'll a bit of why two weekends ago was an AWESOME weekend. Some of you may know about the fact I hated the massive sectional couch I had. It was 2 years old, was a hand me down, and I just hated it. It took up half the living room, could not be cleaned, just bleh.  I have been begging for a new living room set forever but we had to pay the TV and washing machine and other stuff off first Jack said. Then a couple of months ago he told me I could have a new set at income tax time, which was great. Well three weeks ago he tells me that we only had one more week on the TV and it would be paid off ( we were discussing bills at the time ) and we paid the washer off a couple of months ago. I was thinking "Yay, some breathing room for bills!"

Well two weeks Friday's ago he finally gets home and I did not see him pull up. He came in and we get take out on Fridays so he brought the food in and some other stuff, and was talking to me and Alex was jumping up and down on the front steps freaking out and yelling for me to come here. So I get up and walk across the room and look outside...and see the brown leather living room set I have been wanting in the back of his truck!!!! I squeeeeed and bear hugged Jack and covered him with kisses and he smiled and said " There is your Yule present...but now you have to help me unload it lol"

Well before that we had to get the Couch of Evil out of the house, which meant we had to tear half the house apart to get it out the BACK door, it would not fit out the front door. Well even then, we had to take an ax to it, to bust the frame enough to get it out. ( Three big dudes got it IN the house, my weak arms were NOT much help, as it weighed a freaking ton, with Jack to get it OUT. ) We were going to trash it anyway so he went to town with an ax and I clapped and cheered. We finally got it outside and then got the new set in, which was pretty easy. I made good on my promise I posted about here a while back about if I ever got a new couch, I was going to burn the old one and do a dance around it, and by gods I DID!

Now I have a gorgeous set that I love, it is so soft and comfy. I actually have a coffee table and end tables now, and two neat lamps. I am so happy. Yes I took pics and I am going to share now. Please ignore the carpet and walls, they are next to be replaced. One thing at a time..so we never get overwhelmed...is how we work...

So here we go! 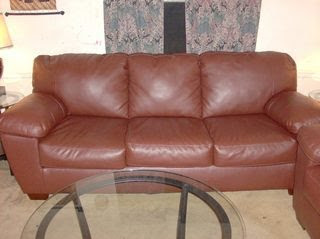 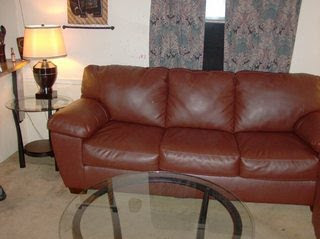 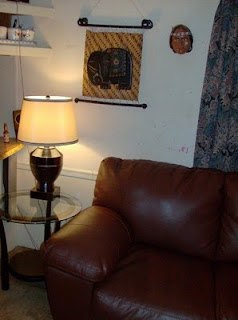 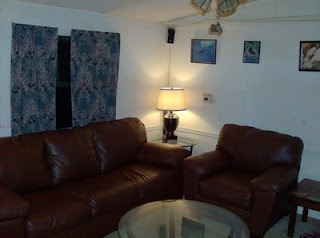 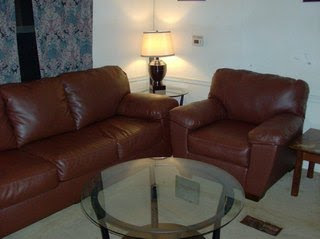 Does it not look so warm and cuddly? You just sink right into it when you sit down..I love it so much!

The other cool thing is that Jack has embraced his inner chef, and spends the weekends, and sometimes a night during the week, creating the most awesome dishes. He is quite the baker, and made two apple pies from scratch this past weekend, and he made the cookies tonight, and last weekend he made some divine yeast rolls that give mine a run for their money. I love his cooking so much I spent all day today rearranging my kitchen so it would be easier for HIM to cook lol. That is another reason I want to just stay home this year for Thanksgiving, because with both of us cooking it would be awesome, and fun.

I don't know...I just want to start my own family traditions...instead of trying to keep those that should be left in the past alive...

But enough for tonight, this is 9 miles long lol. Thanks again to my Fairy GodChick, and more from me later!

*Music of the Moment: Need You Now by Lady Antebellum*
Written By Unknown on Monday, November 23, 2009

I feel you on the stressful thanksgiving family thing. You know you should go, you know what kind of drama it will be if you don't, but yeah. I have felt the same way many times. It would be different I suppose if people didn't work their hardest to make sure it was something that was almost impossible to enjoy. ;-) I think some folks are just high stress people and don't know how to be any other way, as sad as that is.

Also - your living room looks fabulous. I am very happy for you!

I wonder sometimes what I did to grow up in such a loving family, and why I never appreciated it more when I was there. It's like the commercials, and more. I wish you had that, that everyone had that. Thank you for indirectly reminding me of my blessings.

And that couch set is amazing, and I hate the old sectionals too. Used to have one here that just made it hard to move around the living room. I don't blame you one bit for burning it, lol!

And finally, yay for the amazing mate with the inner chef, and I'm glad you appreciate him so much, I bet he feels like the luckiest man on earth.

I'm so glad to hear that you'll be around! I hope you get to feeling better soon.

Ha! Your family get togethers sound like mine! My mom and grandma stress to the point of making themselves ill.

Regardless, I hope everything went well for you on Thursday. And I just LOVE your new couch. Yay for Yule presents. :D