This post has been a long time coming. I have been thinking about this for months. Over the course of the last few weeks, I have seen other bloggers, and people I know in "real life" go through a sort of spiritual identity crisis. I have gone through one myself many times over the last few years.

Being Pagan is a struggle at times, because even in Paganism, there is that need to define yourself, to adhere to a tradition, or a pantheon, a sect, solitary, coven based, eclectic, Native American, Celtic, Egyptian, Norse, Green Witch, Hedge Witch, Kitchen Witch, and a myriad of other choices. Do you consider yourself religious, or do you just practice the Craft? Is it an everyday thing, or is it only for special occasions and holidays? Do you perform complex rituals with tools and all the bells and whistles, or do you just go about your day, fitting in things as you can? Are you Dark, or are you Light? Do you Hex, or Do Ye Harm None? These are just a few of the choices and questions that we as Pagans have asked ourselves.

When I first started, I considered myself Wiccan, because...well....quite frankly I did not know any better lol. I did not realize that other than the major alternative religions like Druidism, Buddhism, and things like that, that all other Pagans were NOT Wiccan. In my defense, I was only 13 or 14, and did not know much about it all. Later I learned that Wicca itself was a religion, and to be quite honest, I am NOT religious, in basically every way. I learned that you can use the craft independently from being Wiccan, and that appealed to me much more.

Then came the Traditional Witches. The snooty witches who think if you cannot trace your bloodline back to someone who was in the Salem Witch Trials, then you were not a real witch. Well, I have no idea if I have any ancestors that were in the Trials, but I DO know that my ancestors were medicine women and men of my Native American heritage, and let me tell you, that makes me just as much of a Traditional Witch as anyone who has ties to the Trials.

Then came the question of what deities do you relate to, or follow? Well for me, sometimes I felt a strong kinship to a few, Morrigan and Brigid and Lugh specifically, but other times I did not. Sometimes I felt a kinship with ALL of then, and sometimes NONE of them. Sometimes I feel they are separate entities,  and sometimes I feel as though they are simply different aspects of the self. Sometimes I feel as if they are all part of the whole, the many faces of a Godhead figure. Sometimes I feel they are just something Man gave name and face to, in order to relieve themselves of responsibility for their human qualities and then the more unsavory qualities. To disassociate their failings from themselves. it is far easier to say " The devil made me do it" than to admit your a twisted individual who revels in such things. Or maybe your not twisted at all, you are just drawn to the shadows of life, rather than bathe in the blinding light....

Ritual. How many books have we read full of rituals so complex your brain gets lost halfway through reading it, much less trying to practice it? Again, there are those people who say you MUST do this ritual for this situation, with these particular tools, with this particular incense, with this particular visualization. Then there are those who say " Nah, just use what you have, substitutions are much better than nothing at all.." I have issues with people telling me how to live my everyday life, I will be damned if someone is going to tell me how to live my spiritual life.

I am not a fixed and inanimate object. I move, I breathe, I change, I LIVE. If I am always changing, why would I want my spirituality to remain fixed and unmovable? Why do I have to trap myself within a rigid and structured way of life that goes against who I am as a person, just to make the "Elders" happy, and to make people accept me as a real Witch? What makes you better than me, to decide how I should live my spiritual life? That is something that should be so deeply personal, so individual. No one can tell me that whatever it is that I am doing is not good enough, that I am wrong, unless I am initiated by Lady Pixie Farting Fairy Dust of the Lady of the Moon Pretentious Witches Coven.

In my weaker moments, I have thought others path was a bit ridiculous, to the point of getting frustrated at what I perceived to be illogical crap. It still takes effort even for me to realize that other people's paths are not wrong, they are just different, even if it makes no sense to me. It is far easier to not care what others think of my path. I have my weaknesses, I am human, like it or not.

So in the face of all these choices, all the questions, just who AM I as a spiritual person?

I am a Spiritual being, made from star stuff, dancing my way down my path while here on Earth. I do not do rituals. I do spells sometimes. I love Nature, and feel a deep kinship with Mother Nature. I am a healer. I am a destroyer. I cross the Hedge and walk the line. I see dead people and hear things no one else hears. I am so intuitive it can be a fault at times. I get frustrated when people blow me off when I try to tell them something, and when it happens, they come back saying they will never doubt me again, only to have them do just that the next time it happens. I do very little for my own gain. I have tools, but I seldom use them. The are in cabinets and on my altar. They are pretty to look at, but are simply symbolic to me. My greatest tool is my mind, and it is far sharper than any diamond honed blade. I can visualize very well, but it is not how I prefer to do such things. I taste, I smell, I feel, as well as see, as well as imagine. I read the tarot. I have problems doing readings for people I do not respect fully, who do not listen to what things are trying to tell them.

I see the magic in everything, I LIVE inside that magic, I do not have to consciously practice magic to be magical. I do not have to read 400 pagan books a year and do 5 rituals a week and 20 spells a month to be magical. I do not have to "do something spiritual" every day to BE spiritual. The fact I even exist is magical, and spiritual. The fact that I am alive after all that has happened in my life is proof of miracles. I am kind and loving, and I am wrathful and vengeful. I have an altar, but it is a part of my house, my house is magical, my yard is magical, my world is magical. My life has been hard at times, easy at times, and almost lethal at times. I have loved every second of it. I am a Mother, a Daughter, a Sister, a Friend, a Lover, a Witch.

I am a creation of the Universe. 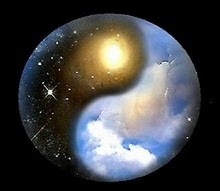 Email ThisBlogThis!Share to TwitterShare to FacebookShare to Pinterest
Tags: Pagan, Religion and Spirituality

*Stands up and applauds thunderously*

I completely agree with you!

Awesome post Bella. I know I'm seeking to find my way to who I am and what I believe. Right now I don't "practice" per say rituals, spells, or the like, mostly out of being afraid to do it wrong or just not knowing how.

We seem to live in a society that says we have to fit in some sort of box and I think that is why so many of us are searching for who we are, especially when we don't fit in said box.

Ellie, that is my problem with so many pagans out there today. If you do not do it "their" way, then you are wrong, and that is just crap. Do what feels right to YOU, walk YOUR path, not follow along someone else's.

Whatever you feel is right, IS right for you.

Excellent post and I could not agree more. Thank you :)

*Joins in applause* This post brought tears to my eyes. Thank you for the reminder I'm sure we all need on occasion. ^-^

wonderful... simply wonderful... the magic we all possess is in ourselves, not inside a specific book. Loved it...

Loved this post... That's why I just joined the Project Pagan Enough. I'm pagan and I love feeling free and not obliged to anything. I feel comfortable being simply myself!

i am divinely imperfect, made of stardust & magic, amidst it all just another wonderous creature.

Lovely post Bella. I have been thinking a lot about these sorts of thins recently. I whole heartily agree with you

*Woot!* Clapping furiously with everyone else!

Wonderful thoughts about a topic that is on alot of Pagan's minds. I don't like being compared to "the next witch" either. I am who I am - and all the magic that comes with it!

What a beautifully written, well thought out, absolutely true post!

How did I miss this post?
Bella this is wonderfully written and so truly inspiring, thank you for writing it and having the balls to say what most of us want to say.
Like you I don't know what "label" to wear for my religion as I don't believe in religion, I am more spiritual in a sense than religious. In reading this I read how I truly feel and never said it.
Thank you.