It has been a long week..

Well this week I had planned on working on my kitchen, bathroom, and Alex's room, but fate had other plans for me.

I took Monday and Tuesday for myself, if you read the last post. Good thing I did, because I would need the energy I regained.

Wednesday afternoon, 20 minutes after Jack got home, his cell phone went off and said he had a voicemail. He was in the shower and told me to listen to it and see who it was. I did, and it was my Mother, telling us that she needed to take Dad to the hospital and she needed me to come stay with the kids. ( If you don't remember, my older two live with them just down the road..)

I called her back and asked what was up, and she said that Dad was having chest pains and was all swollen up, he looked pregnant, and he was short of breath. I told her Jack was in the shower and as soon as he was out I would be there, since the kids are old enough to stay by themselves for a while. She said ok and I went to tell Jack what was up. He was still in the shower and he said to just go ahead and take his truck. ( Mine is out of commission right now ) I asked him about him going to work the next day, and he said do not worry about it, he would go in late if need be. So I got Alex and I dressed ( no way would she have forgiven me for not taking her to spend time with her brother and sister, whom she adores.. ) and we left.

Mom and Dad were still there when we got there. I feel so bad for my Mom, she has so many health issues herself, ( a double lung reduction for starters, she only has half of each lung ) and she has been sick with a cough herself, so she was already tired. Dad DID look pregnant, he is a slender man, and his belly, face, hands and feet were very puffy. They left shortly thereafter, and I spent time with the kids and fixing their three computers. I got there at 4:15 in the afternoon, and Mom did not get home until 1 AM...and they said they wanted to keep him overnight for more tests. They gave him a diuretic and apparently he was peeing gallons, so did in fact have a lot of fluid. ( I should point out here that my Dad has had a triple bypass done several years ago, and had to have heart caths done before. ) I got home around 2 AM and went to bed at 4 AM...

I called Mom the next afternoon and she said that they were going to do a heart catheter on him later that day, and she needed me to go back to her place and look after the kids. ( Sad dad is in the hospital but LOVING all the time with my babies without anyone's interference lol ) I told her as soon as Jack got home I would be on. She said that she should be home by 8 at the latest that night since Dad would have to lay flat and rest for the rest of that night.  I talked Jack into coming with me, as I has seen him 20 minutes in two days and we missed each other horribly.

We got to the kids and I made dinner, and then we all went outside and playing for a while, tossing a ball and a Frisbee around. Jack usually goes to bed at 9, since he gets up so early, and he still had not had a shower, so at 8 when we still had no word from Mom he was a little antsy. She finally called at 9 that night and said she was on the way, and got home about 10 till 10.

It turns out he had 5 blockages in his arteries, all of them 90 to 99% blocked. The doctor flat out told my Mom that within a week at most he would have suffered a massive heart attack and died. This confuses me a bit, because my Dad is on meds for these things, he does not eat junk food or fatty foods, and he goes to the doctor regularly. I asked Mom about that and she said the doc told her all it takes is a tiny blockage in the artery, and within a couple of days it can get blocked up just that fast. Scary when you think about it!

Poor Mama was so tired, she looked dead on her feet. I had the kids do dishes after dinner ( Yay for teens old enough to do dishes lol ) and I set the coffee pot for Mom the next day. We left shortly thereafter and Jack got a shower and went to bed, and Alex was not far behind him. I stayed up unwinding and talking to Stag, and then it all caught up with me and I crashed.

I called Mom when I got up this morning and she was on her way home with Dad, and he had strict orders to take it easy for a few days.

We will be over there most of the weekend...and as far as I know Alex is spending tomorrow night...we are going over Sunday to help cook Easter dinner, although to all of us it is just Sunday dinner lol. I figured plans would have been cancelled but with Jack and I helping, the weekend can continue as planned I guess, which is good, we do not get to spend much time together as a family anymore with my parents.

So that is how I have spent this past week. I am so glad that they took Dad into the hospital, this was a very close call! But he is home now, which is a good thing, and I have gotten to spend a lot of time with the kids, which does not happen near enough.

I hope everyone has a great weekend and that your loved ones are healthy and happy! 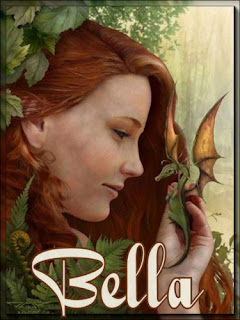 so sorry to hear about your dad, yet also glad to hear that he is doing better and you were able to spend some alone time with the older kids.... wishing you and yours a restful weekend filled with family and love... blessings

Wow, that IS scary that blockages can get dangerous that fast. Here's hoping both of your folks get to feeling better!

Wow! I am so sorry about your Dad. But, I am glad to hear he's back home, now, and doing better. Those blockages are scary stuff. My husband had his when he was only 38. It really doesn't take much.

S sorry for only today coming here and to know about this! I hope your dad is much better by now, Bella!