One of those weeks...

It has been one of "those" weeks for sure. I fought a hell of a migraine from Thursday until Tuesday. Jack ran out of his pain pills, and the horrible nurse at his doctor's office was in no hurry or in any way concerned about it. So he was in agony for three days. He even went to the ER, the pain was so bad, but because he has a "specialist" they would not help him. Finally he had to threaten them with a lawyer to get results ( he is still on workers comp ) but at least he finally has his medicine. We actually DID contact a lawyer, and in fact Jack meets with him in the morning, to see if he can help us get some results. His job is now talking about trying to put him on disability, and he has still heard nothing about that second surgery he is supposed to have. The doctor office says the insurance company is dragging their feet about approving it, while the insurance company said that the dingbat nurse has not even submitted all the paperwork to them yet! So we are caught in the middle, and decided that having a lawyer would be a good thing right now, to help us navigate what is to come. We are not looking for money or a settlement or anything, we are just looking for proper doctor care and hopefully get him back to work, even though we know he will probably never go back to being a heavy line mechanic anymore. His awesome boss created a position for him though, so if he ever does get to go back, he will have a job, so that is good.

So stress has been high. It sucks to have to watch the person you love most in life in constant agony, and there is not one thing you can do about it. I think that is why my migraine was so vicious, the stress and worry were just getting worse, and so did the migraine.  I actually got what I call reverse tunnel vision for a day or so it was so bad. As a lot of people who have migraines experience, I know one is coming because I get these wavy lines in front of my eyes, kind of like heat shimmers on a hot road...this is my cue to take some meds and do what ever I can to head it off. Only this time I could not get it under control, and the wavy lines were so abundant I could not see straight ahead. All I had was peripheral vision...while tunnel vision is where everything else fades except the center of your field of vision. Ergo, reverse tunnel vision. I could not hardly stand to even look at the computer screen, it would cause a flare up after about ten minutes. I live on my computer, so this part is what bothered me most, sad to say.

If we get an income tax this coming up year, I really need to go and get new glasses. I think that would help a lot.

So yeah, the last few days have been less than fun to say the least.

At least he is no longer in pain, nor am I, and I can SEE, so that is always a good thing.

He is nervous about tomorrows meeting with the lawyer though. Or rather, the investigator, as this is just to see what kind of case we have, what we are looking for, and if they think they can help us. I can not go with him, for reasons I will explain shortly, so I made him a sheet with questions to ask and things to mention. We like to joke that I am the brains of this operation ( that is our marriage ) and he is the brawn, and while it is a joke, as he is very intelligent, I am a pro at handling things like this and they make him a bit nervous.

The reason I am not going is partly because of Alex, I have no where to put her, and she is way to hyper to sit there for a couple of hours quietly while we talk business. The other reason is because we have a new furry family member. Friday, Jack and Alex saw this dog running around in the road. Skinny, ribs showing, skittish. She followed Jack and Alex back to our house from the mailbox up the road at a distance..well, it was Alex she was following. She came in to the yard and would not come near Jack, but she went to Alex and laid down at her feet. I got her some water and some food, which she scarfed. It was obvious she had not had a meal in a while. It is also obvious that she is part Shepherd and part Coyote. (Called a Coydog actually lol ) She lopes and acts like a Coyote, with a shepherd face. She is young, maybe 8 or 9 months old.   Once Alex started petting her, she let Jack and I pet her, and suddenly she was the most friendly thing ever. We coaxed her in the house, and she promptly jumped up on the couch and went to sleep. Not a care in the world. She is Alex's shadow. Follows her everywhere, and whines if she leaves the house or goes to the bathroom without her. She sleeps in the bed with her. We do not know if she used to live in a house, or with people, but she is house trained ( although, from our experience with Wolves, they do not mess in the house usually, they will hold it until they are outside, even if "wild" ) and she acts almost identical to our Tundra wolf, Baby, that we lost two years ago to old age. Jack gave her a bath, and took her to all of our neighbors, and to the two streets on either side of us, to see if she belonged to anyone close by. No one claimed her, but a few said they had seen her in and out of the woods for the last week or so. So, unless we see a missing dog sign with her on it somewhere, we have adopted her. I named her Wiley ( Wile E Coyote lol ) even though it is a girl. It is weird, we feel like she has always been here, and we have only had her for less than a week. The only problem is, we do not know how she will react if we all left. She is not destructive, and she gets along perfectly with Soccer, our Shih Tzu, but she freaks if Alex leaves, even if we are still here. So we worry about leaving her alone just yet. If she WAS with humans before, it has obviously been a while, as you could count all of her bones, so there is a good chance she has abandonment issues. I do not want to come home and find my couch ripped apart or something. She is a BIG dog, even as young as she is, with her paws on my shoulders she is almost as tall as I am, so she could reach counters and my desk and stuff. So we are going to have to ease into that...all of us go out in the yard, or take a short walk, leaving her here, then coming back, to see how she does, and to let her know we WILL come back. I do not think I have ever seen such a loving and trusting dog though, especially one who seemed to be half wild. She is very submissive, and will lay down or stop messing with something if you raise your voice. So she is a bit of a mystery, but she is a good addition to our family. I wonder what she will look like as she fills out and grows up? 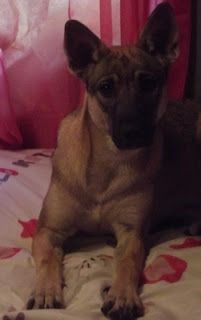 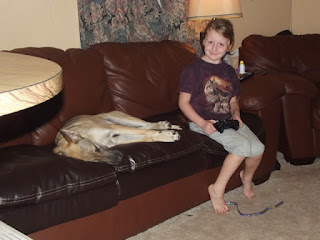 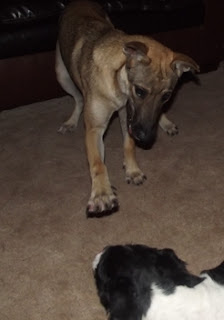 She loves to play with Soccer lol. 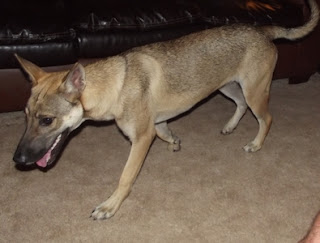 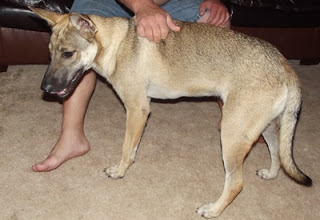 She is a total sweetheart, so hopefully she will get used to the place and realize that even if we leave, we WILL be coming back, and that we are not leaving her forever.


So yeah. That is the main highlights for this week. I missed my Foodie Friday post last week, due to the migraine, but next up is Stuffed Bell Peppers. They were so good, but we ended up eating them in the dark. We have had really bad storms almost daily here for the last couple of weeks, and right as I took the peppers out of the oven, the power went out for several hours. So we had a candle light dinner lol.

I will work on those pics tomorrow and get the post ready to go for Friday.

I think that sums it up for now. I am sorry for the several day absence, but I was trying to keep my brain from exploding and keep Jack from being in agony. Things should return to normal now!

Have a great Thursday!

I am SO glad you are feeling better and that Jack finally got his damn pills.

Yes, it is agony watching the one you love go through pain and you can't do anything to take the pain lines etched in their face away.

I could write a book on the nurse you spoke of so I shall just keep that to myself. Let's just say: That woman needs to be fired!

Wiley is so cute! I can't wait to see more posts about how she is filling out, how she is doing interacting with the family, and just MORE PICS in general. I just want to snuggle her.

We were talking about how slow this week was going and now it's Thursday and I just shake my head and wonder where the past two days went. I don't understand....