I have decided to turn Friday's into "Foodie Friday" here on the blog! Hope you all enjoy the segment!

This week we have a semi-homemade version of stuffed green bell peppers. I say semi-homemade because I used a package of Spanish Rice mix; I was out of regular rice, and canned sauce and tomatoes.  A funny side note about this dish is that we were having a hell of a storm here in North Florida as I was making these, and right as I took them out of the oven, the power went out, and stayed out for several hours! The final plate pic was taken in total darkness, with the flash on the camera. We had an unplanned candle light dinner that night! I also cut the peppers in half as opposed to stuffing them whole, to see how it worked out. I liked it way better than the whole ones, the peppers were more tender.


4 or 5 medium to large bell peppers, cut in half and seeded. ( I saves the tops and bottoms of the peppers and diced it to add to the rice mix for added texture and flavor! )

1 medium red bell pepper, finely diced ( I had some in the freezer from the last big haul I got from the farmers market )

1 pound of hamburger meat; browned and drained ( I used ground venison, and just leave it out of you want a vegetarian version! )

8 oz or so of shredded cheddar cheese

Spices to taste: I used salt and pepper, garlic, cumin, onion powder, a touch of chili powder and a touch of red pepper flakes for a little kick.

Brown ground meat in large, deep skillet if using. Add a little salt and pepper to the meat. 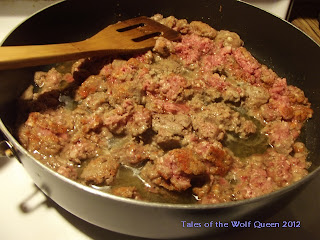 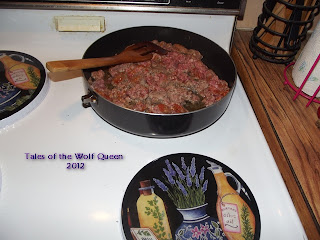 As a side, check out my new burner covers. Jack melted one of my old ones by turning the wrong eye on lol. Aren't they gorgeous? 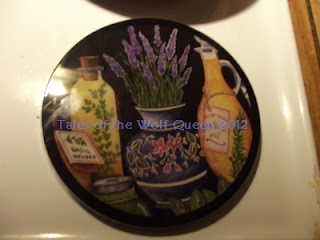 While the meat is browning, dice the onions and the red peppers. Split the green peppers and seed them, chop the tops and ends if using, and add the diced veggies to the meat. 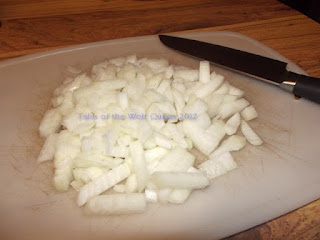 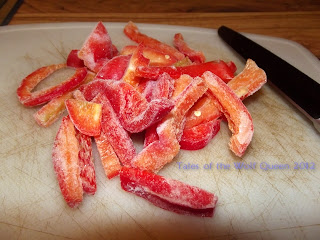 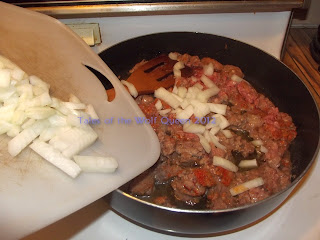 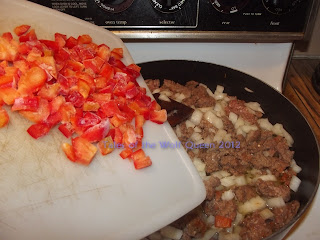 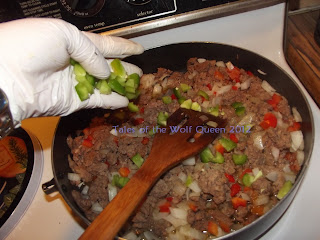 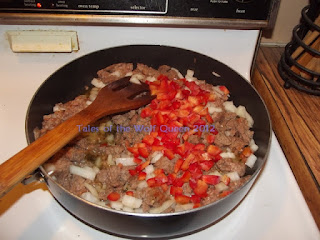 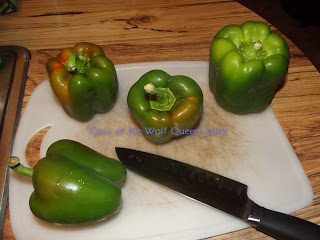 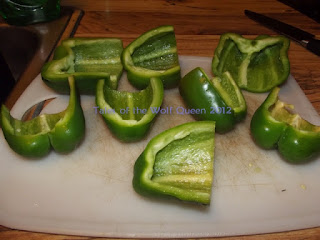 After the meat is done and the veggies are tender, drain into a colander and put the empty skillet back on the stove. Add Spanish rice mix to the pan, with however much water and additives the package calls for. Cook until rice is tender and most of the liquid is absorbed. 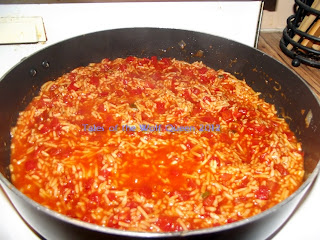 Add one can of tomatoes and spices, stir.

Add the meat mixture to the rice, stir. 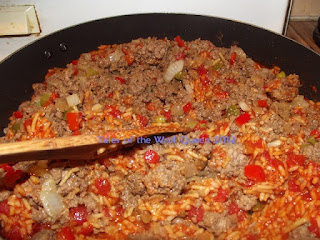 Once it is all stirred together, line a deep baking dish with foil, and place the pepper halves in the pan. 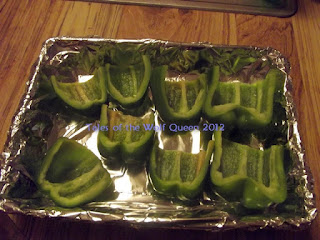 Next, fill the pepper halves with the rice mixture, then return the filled halves back to the pan. 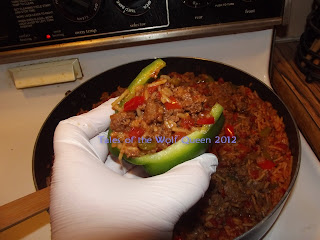 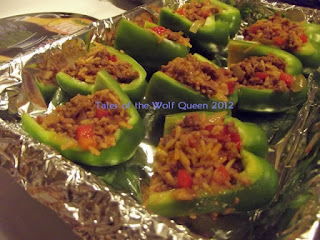 Once all the halves are filled, sprinkle cheese on top of halves, then cover with tomato sauce. 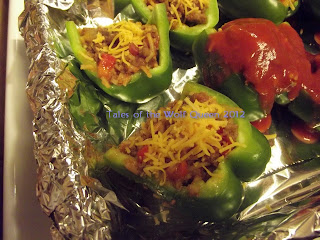 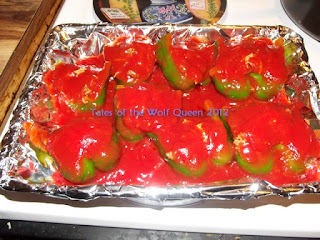 Cover with foil and place in the 350 degree oven for 30 to 45 minutes, or until peppers have reached whatever level of tenderness you prefer. We like them soft, with just a touch of crispness to them, which is 35 minutes in my oven. 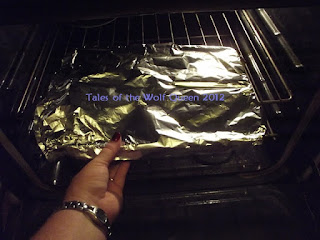 Taken them out, spoon any sauce from the pan over the top if you like, and serve! 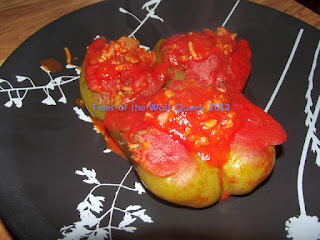 I served garlic bread with these, but as I was using residual heat from the oven since the power went out right as I took them out, the bread was pale and not pretty, so I did not add it to the photo. Tasted good though!

So there you have it. Easy and tasty dish! Let me know if you have any questions, or if you try it!

These sound amazing and I can't wait to try them...

So, I was nominated for an award, and in turn I've nominated you! Here are the details:http://www.aoibhealslair.com/2012/08/one-lovely-blog-award.html. Looking froward to reading your entry!

Those look so scrumptious!

I have never made them smothered in sauce before. I'll have to try that.

We usually keep them whole and fill them with all kinds of goodies and put cheese on top. We put the peppers on a cooling rack that is then placed in the pan and put in the oven. We put water in the pan so that the whole peppers get nice and tender.

I LOVE your new burner covers. They are beautiful and very "Kitchen Witch".

I also love your plates. They are very cherry blossom japanese dark side. Lol! That's the best way I can explain them. They are awesome!

Can't wait to try the peppers this way!

Thanks for the award Vickie!

TCW: I usually do mine whole as well, but I found out that doing it this way lets them get more tender and less watery...and the sauce gives it a yummy flavor boost.

I love my plates to, and Darkside Cherry Blossom is exactly what I call the pattern too LOL!