Where did you go?

I have been asking myself that question a lot over the last few days.

I used to be a very confident person, at least to the outside world, even if I was having an attack of self doubt on the inside. It was a long road to get to that point where I felt comfortable with myself, and it took a lot of work.

Lately I have done some things, said some things, and felt some things that are very outside what is normal for me. I am the type of person who does not really care if someone likes me or not. I can't say I do not care what people think of me, because we all do that, even the most confident of people, but it did not consume me. I was the type to feel that you either liked me, or you didn't, and that was that. I did not lose any sleep over it. I am not exactly lacking in the friends department. That might sound a little arrogant, but what I mean is, I know I had people in my life who cared about me, I had people who I mattered to, and I was happy with that. I was not out there trying to win any popularity contests, because I had no need to do so. I was secure in myself, my skills and abilities, and my life.

It started when I broke my ankle. I was suddenly incapacitated, having to rely on my parents and kids to do everything. I was separated from Jack for over a month because he had to work, so I only saw him briefly at night and on weekends. That was the first time I have been away from him for that long. I lost two people who I thought were really close friends, through no fault of my own I found out later, but I spent a lot of time wondering what I had done to be abandoned so suddenly. I lost one of my best friends, which WAS my fault, but luckily I got her back a year ago.

Not long after I got back on my feet, Jack got hurt, and our entire life changed. Nothing was secure anymore, we started struggling really bad, and we were not that well off to start with.

Then I found out my Dad had cancer, and a few months later he was gone.

So basically, in the span of a year and a half, my entire world was turned on it's ear, and nothing was the same. The constant worry, sadness, fear,and struggling got to me. I started to lose myself. I did not realize it at first. I was depressed, which was not a surprise, given everything that was going on, but it got really bad. To be honest I am still struggling with depression, but it is better.

I started doubting myself. Take cooking for example. I am an excellent cook. I love to cook. Nothing made me happier than to see my family or friends sit around and eat the food I prepared, and watch them enjoy it. Once I started to lose myself, however, I started to doubt everything, and I even doubted my cooking. I started making rookie mistakes. I burned things. I over or under seasoned everything. Suddenly the simplest of dishes seemed to take more effort than I had to give. I stopped wanting to cook at all.

I am an obsessive vacuumer. ( I know that is not a word, but whatever. ) I ran the vac every day, sometimes twice a day. I started running the vac every other day, then a couple of times a week, then once a week if I was lucky. I know that seems like something small, but it signifies a lot as to my general state of mind.I only washed clothes when we pretty much had nothing to wear, instead of staying on top of it like I usually do.

All the small things that made me who I am as a person started to fade away, and I did not even see it until recently.

The biggest change came in the way I related to other people. I started letting others dictate my self worth, and I don't care how awesome you are, when you do that, you are going to come up short. There is always someone out there who delights in making you doubt yourself. There is always someone out there who is quick to judge, even if they are the last people who should be judging anyone.

I recently watched the movie Mean Girls for the first time, and that is kind of when I started noticing things. I was feeling a lot like Lindsay  Lohan's character when she first got to school. Trying to integrate myself into an already established clique. Suspecting, and then knowing they looked down on her, talked about her. Just trying to find somewhere to fit in. I started becoming very needy and clingy. I took everything personally. I posted these dramatic things online, seeking attention. ( I did not realize that then, I realize that now. ) The only attention I got was bad. People started looking down on me, and saying snarky, unkind things. Backhanded compliments. People blasting me for my actions, then turning around and doing the same thing. THEIR actions was the first wake up. Although it was not done to help me, and in fact it might not have even been towards me, but in the end it did help, because I realized how they were being, and I have NO desire to be that person. No one should ever be one of the Mean Girls. I do not even like that type of person, so why would I want to BE that type of person? I am not a mean girl. Nor am I that girl trying to fit in.

Tonight I posted a joking status about how one of my biggest fears is to cook for other people's children. The person closest to me in the world posted a comment to build me up and tell me I was amazing and not to let some kid dictate the worth of my cooking. I sat here, blinking at the screen for a few minutes, trying to figure out why she posted that. I responded that I know I was an awesome cook, it's just that kids are picky and I was worried that Alex's friend would turn her nose up at dinner. ( She didn't, in fact she asked for more and told me I should tell her Mom how to make it, it was so good. ) Since I was talking to that person privately, I asked her "Do I come across as THAT damn insecure?" Her answer was "Yes, yes you do."

There was the REAL wake up call. This person knows me better than I know myself, even better than Jack, and if SHE saw me as insecure, knowing me backwards and forwards, knowing that I am usually a confident person,  then obviously I had become insecure and not my usual self. That pretty much confirmed what I have been mulling over for a few weeks now. I had lost myself, and become something I never wanted to be again.

Last night, I was talking with a friend of mine, named Ravi. She is a local Slam Poet, and she shared one of her poems/lyrics with me, and it hit me really hard, and I asked for permission to share them, since she has not posted her stuff in a public place yet. She gave me the go ahead and I posted it on my Facebook and I made a little graphic with the lyrics on it. ( You can also scroll down to the footer of this post and see it there in a larger version. ) 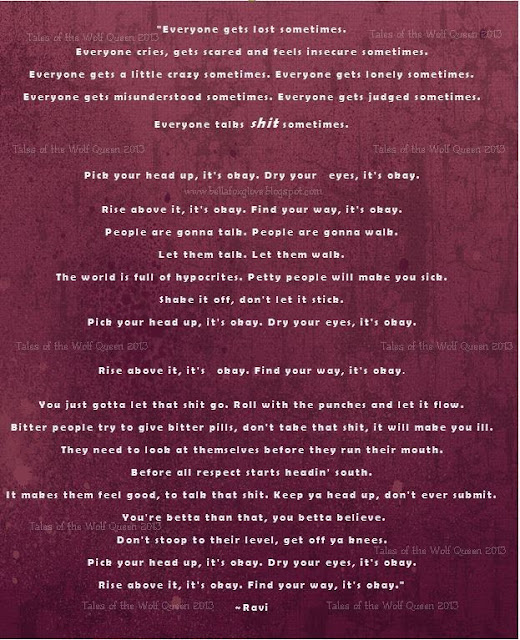 The secret is....those people do not matter.

Wasting my time and energy on chasing down people who might not want much, if anything, to do with me is an effort in futility. Letting ANYONE else dictate my self worth is a mistake. The people who are supposed to be in my life will be there WILLINGLY.  The last two years have become a part of me and my life story, but they do not DEFINE me. Times are hard, but being myself is what is going to make sure I get through it. The person I was trying to become sure as hell could not handle it. Just because I get a little lonely sometimes does not mean I have to go chasing down the wrong people to fill the void. A void that is not even created out of actually being alone. I am never alone. I am surrounded by people who HONESTLY care about me.The void is from feeling like I am alone in my struggle. Everything adds up, and keeps getting piled on, and it is the loneliest thing in the world at times. The truth is I am never alone.

So no more of this needy, clingy, and insecure little girl. I am a strong woman. I already have people in my life who WANT to be there. I do not have to try to be someone I am not to fit in with people or get people to like me. I am not a victim. I am the gatdamn WOLF QUEEN. It is high time I start acting like it again. It  is time to once again learn the lessons that my life long wolf totem is here to teach. I will take back the reins of my life, and stop trying to find other people to validate my existence.

I can validate myself.

I am me, and that is all I can ever be. Anyone who does not like it can find the door, the unfriend button, or the unlike button.

The Queen is back in the Castle.

YOU...yes you...the person reading these words, are AWESOME. You are the most amazing you that ever was. No one else can never be you. Keep being you, as only you can. Bella loves you.

Email ThisBlogThis!Share to TwitterShare to FacebookShare to Pinterest
Tags: Be Yourself, Finding yourself, friendships, Losing yourself, love yourself, Mean Girls, Relationships, self worth