Monday's are a bummer and a relief all at the same time....

I am usually bummed because Jack has to go back to work, and now that hunting season is fast upon us, he is gone more and more with my Dad on the weekends getting the hunting land ready......and Sunday's are usually pretty awesome because we watch the race and usually have a good day...

However, I am also relieved to a degree because the house is quieter and I get to put the house back in order. I love the man, but GODS is he messy lol...

This morning he decided to surprise me. I was sound asleep at 8:30 this morning, I had only been in bed a few short hours, and suddenly this ICE COLD body slides up under the warm covers with me....an adult MALE body....when only Alex and I are supposed to be home! My eyes flew open and I whipped my head around to see who in the hell was in my bed, and Jack was grinning at me. Well there was light streaming in my open window, and Jack leaves for work before daylight, so I glanced at the alarm clock and saw it was 8:30.

Him: Good morning honey...( all chipper, I have to add here that I am not a happy morning person lol..)

Him: *Laughs* I took a vacation day because I did not get to see you much the last couple of weekends and I wanted to stay home with you, and it is cold because you left the house windows open and I have been sitting in the blizzard in my shorts for a cpl hours....

Me: Awww...that is sweet *Snuggles deeper into blankets* Oh, and PFFFT btw, its only like 65 in here, it is NOT cold!

Him: Pffft yourself, its cold, see? *Wedges ice cold leg in between mine as I lay on my side away from him*

Me: *Yelps* DUDE!! *Tucks blankets in between us as a barrier*

Me: *SIGHS...drags out of bed* Is there any coffee left?

SO I went to the bathroom and then put on some warm pants and went and sat on my back steps for about 45 min, sipping the coffee he brought me. After that I came back inside and plopped down here in my chair, and saw he had done some dishes....I dont know why or where they came from, since the kitchen was clean when I went to bed, but hey, least he washed them. Alex then decides she wants bacon. So he fries us up some bacon which I sit here and munch while he chops up leftover smoked chuck roast from Sunday to make into some of his infamous BBQ...( you know, the one the friggen cat rather eat than the mouse?? ) and that ended up being lunch, served on onion rolls. ( Yummmm ) He then cleaned the kitchen again. ( He is an awesome, but messy cook ) I had laid out some cubed steak for dinner, and we got to talking about something we are both pretty serious about, and that is homesteading and being able to survive when the world goes to hell in a hand basket. That is another post so I wont go into that here, but we got to talking about stocking up on non perishable food, and food with a really long shelf life, how to store it, etc. Well we own a dehydrator, and we had never used the jerky making kit that came with it.

After reading the directions, he decided to make a teriyaki jerky using ground beef....so I pulled some out of the freezer and he went to read on the couch for a while and I sat here. Well right as I was about to get up and start dinner around 5, he jumps up and starts rummaging around in the kitchen, getting pots and stuff out. I asked him what was he doing and he said he was about to cook dinner....

I sat back down in my chair and smiled.... 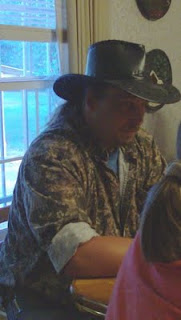 So he made a kick ass dinner of cubed steak, english peas, corn in some awesome seasoning stuff...leftover tots from lat night, and leftover biscuits from last night. it was yummy. THEN he proceeds to start dough for cookies! Peanut butter and Hazelnut cookies to be exact. He mixes the dough and puts it in the fridge to firm up while he cooks and we ate, and then I cleaned the kitchen from dinner, and when I was done he started making cookies...and omgs they are AWESOME.

THEN he proceeds to make the jerky AFTER he cleans up the cookie making mess, and it is now almost done in the dehydrator...it is already done enough to eat..medium rare, about an hour ago, but it will be totally ready around midnight. It is good, we already snagged a piece.

So this wonderful man basically took a day off to cook for me lol. I dont think I have seen him wash dishes the entire 6 years we have been together as much as I saw him wash today lol. 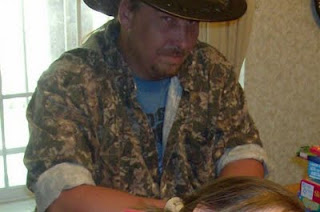 After all that was over, I jumped in the shower with Alex at 8 pm, and got us scrubbed, and then dressed and dried ( hair ) and then I folded a load of clothes real quick and we settled in to watch Lie To Me at 9pm...which was awesome.

I even managed to accomplish the three things I wanted to get done in the house today, which never happens when he is here lol. I ran the vac in the whole house, swept and mopped all the linoleum in the house, and washed, dried, and folded 2 loads of clothes.

Now he and Alex are passed out and I am relaxing...waiting on the jerky to get done so I can put it up.

It has been a really awesome day.

Now this week I get to get Alex's Halloween costume ready, as she is going with my Mom and my two other kids, and she is spending the night with Mom, so adult time yay! Sunday we are getting up really early and going to the gun range, after a breakfast of Cinnamon Rolls, and then to get Alex, and then back home in time for the race, which is Dega baby!

I hate to add this at the end of the post, because it is a very awesome honor, but Lyon over at The Wandering Hearth has asked me to guest blog over at her place on Sunday, and I am SO excited and stroked, so look for that.

Thank you again Lyon for asking me, you have no idea how awesome it made me feel that you asked!!

Hope everyone had a great week!

*Music of the Moment: Little Miss Can't Be Wrong by Spin Doctors 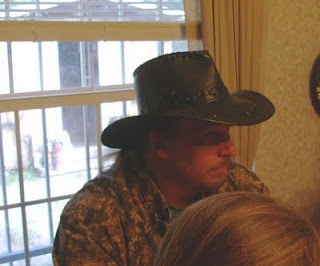 Awww...just getting the warm fuzzies over your wonderful day with your man! So nice of him to cook all day for you (why can't they do this more than once every six years though?)

That's so sweet! My guy did dishes tonight as soon as he walked in the door from work. I'm still in shock. I'm super stoked about reading your guest blog over at Lyon's place :)

Awww you have one of the best guys evah! You two are too frickin sweet. lol I'm glad to hear you had such a good day, that's awesome. Every Monday should be that way. (But I guess we'd just end up dreading Tuesdays instead?)

And I'm telling you, thank YOU Bella. It makes me happy that you're so excited. :D I'm very grateful to you for being willing to help me out with the Hearth and I'm really excited to see how you choose to use the space. =)

what a treat for a Monday morning/day... He is too nice.... A perfect way to start the week out... and congrats on your guest blog spot.. can't wait to see it...

Aww... makes me miss being able to do all that for my own lady like woah. =(

And all that food! I just finished dinner, yet my mouth is watering. LOL