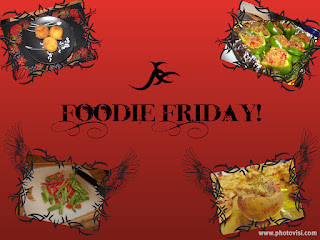 What? Did you say Jesus Seeds, Bella?

Today's post is about food, but it is not a recipe. It is about something that irritated the hell out of me and I wanted to post about it.

First, a confession: I love Candy Corn. I know, it is not even a food, it is sugar and food coloring, coconut oil and some waxy stuff. They are terrible for you, they make my teeth hurt, and all kinds of stuff. I.Don't.Care. They only come around once a year, I buy a little teeny bag and it takes me 3 months to eat it, because I can only eat like 5 at a time. I love them. Sue me.

Jack and Alex and I were shopping for groceries the other day, and Jack came up to me with a HUGE bag of candy corn. I told him I did not need it, as I had bought my yearly teeny tiny bag at the dollar store earlier. He said "No, I do not want you to buy it, I want you to LOOK at it!" So I glanced a little closer and saw that it was a giant pack of candy corn in little individual packages, to give out to trick or treaters. So I thought. Upon closer inspection, I saw the name of the candy on the bag. This is what I saw: 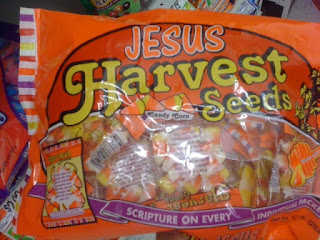 (No this is not my pic. I got it off of google, and every time I tried to click on the blog it came from, it told me "Page Not Found" so if anyone DOES know where it came from, let me know and I will link to it. )

Complete with a scripture on every little package!!

My response: What the fuck?

I was immediately irritated. Yes, I am considered Pagan, because I am not a Christian, but come on folks. Everyone SHOULD know by now that Halloween has never been about Satan or Devil Worship or ANY of that shit. It used to be about Celtic people dressing up in ancient times on Samhain to ward off ghosts and evil spirits. To ward OFF evil spirits, not WORSHIP them or BECOME one.

Straddling the line between fall and winter, plenty and paucity, life and death, Halloween is a time of celebration and superstition. It is thought to have originated with the ancient Celtic festival of Samhain, when people would light bonfires and wear costumes to ward off roaming ghosts. In the eighth century, Pope Gregory III designated November 1 as a time to honor all saints and martyrs; the holiday, All Saints’ Day, incorporated some of the traditions of Samhain. The evening before was known as All Hallows’ Eve and later Halloween. Over time, Halloween evolved into a secular, community-based event characterized by child-friendly activities such as trick-or-treating. In a number of countries around the world, as the days grow shorter and the nights get colder, people continue to usher in the winter season with gatherings, costumes and sweet treats.


So yeah. That was then. NOW for most of the population it means letting your kids use their imagination and dress up like their favorite character and go out and get a bunch of candy and have fun being out after dark. In no way has it ever been about being evil or worshiping the devil, at least as far as I know. Some freaky folks may do that on a personal level, but that is all them. So instead of letting my kid go out and have fun playing dress-up and scoring some sweets, now I have to have someone shoving their religion down my kids throat because they are trying to combat evil. My kid pretending to be a princess or Woody from Toy Story is evil? Does that mean when the preacher's 5 year old is in her room playing dress up on an average Tuesday that SHE is evil and worshiping the devil? Of course not. She is a little kid using her imagination to do something fun. Just like kids do on Halloween. What day it is should not matter. What folks did hundreds and hundreds of years ago should not matter either, ESPECIALLY when there was nothing evil about it in the first place!

It is not the name of it, it is not just because the fact Christians did it or that I hate Christians, because I don't, I love everyone until they give me a reason not to, it is because they are trying to turn something that is not evil into something to be afraid of, to be a sin, to control people. I do not care who did it, or what they call it, the reason behind it is just flat out wrong.

It irks me. What you teach your congregation in the privacy of your own church is your business, but when you start plastering scriptures on candy and other stuff, where my kid can be influenced, I have an issue with that. I would not go and plaster spells on candy and give it to YOUR kids, and I do not appreciate you doing it to mine. My kids will make their own decisions about what religion they want to be, if they choose to be ANY religion, when they are old enough to understand it for themselves and make an educated decision. I do not influence my kids to be Pantheist, as I am, nor does Jack influence the kids to be Pagan/Agnostic. Hell, my MOTHER, who IS a Christian, does not influence the kids to be Christian.

Folks will not agree with me, and that is okay, but this is how *I* feel about it. I do not want any religion, including my own ( even though it is not a religion ) to influence my kids before they are ready to logically examine them all and make their own choice based on what calls to them. It is CANDY for Pete's sake.

I would also like to note that in the middle of writing this, when I went to get Alex off the bus, in the mailbox was a package. In that package was a personalized brand new shiny black bible with Jack's name on it, given to him by his father ( who is in prison ) and on the inside cover, it was dedicated to all three of us. Jack, myself, and Alex. Jack raised his eyebrows and walked off, but I spent a few minutes flipping through it. I LOVE it. I clutched it to my chest and breathed it in. I held it in a sense of reverence. It is gorgeous and in large print. I am no stranger to the bible, and I can quote scripture better than most Christians can, and I adore this book. Just because I do not subscribe to the religion itself does not mean I can not appreciate the words and the thoughts behind it, especially in the New Testament. I will read it from time to time, I still do that, and I will save it for Alex when she gets older. She may or may not decide to be Christian, but it is a beautiful book, and I do not attach all the stigma and dogma to it that most do. It just became an instant heirloom, and even if she is not Christian later, I will implore her to keep it and give it to her kids, should she choose to have them. My problem has never been about the book, or even about the words, it is about the people who twist it and use it as a weapon to inspire fear and discrimination and judgement.

I think Jesus was a wonderful scholar, healer, and all around bang up guy. But he was still at least part human, depending on what you believe, and he had emotions and thoughts, fears and doubts. I am not in any way bashing Christians. If it were Muslims with passages from the Quran or Jewish passages from the Torah, a Pagan with spells, or whatever holy book from whatever religion, I would be just as upset. People need to be free and allowed to make their own choices, and I feel that this taking over of candy and putting scriptures all over it and trying to turn it into something it is not, or turn it away from something it is not, is crossing a line. It is candy. Not a religious tool.

I just added this feed to my bookmarks. I have to say, I very much enjoy reading your blogs. Thanks!

OK...as a practicing catholic I am a tad insulted at the candy corn. In some way, preaching on a bag of candy corn seems just wrong....I would love to know who is profitting from that!! Thanks though~now I'm craving it!

I know you have been through a lot lately and thought you deserved an award. Go to www.witchrants.blogspot.com to see the Sunshine Award.

Thank you to the two anonymous folks, I really appreciate that!

Kecarr, I was about to apologize, I thought my post offended you, but then I re-read it and saw what you meant lol. I am willing to bet that no church is actually getting any money from that deal, my guess is a religious owner of the company is doing it, and putting that bank in his own pockets.

Rachel- THANK you so much for the award and the kind words, I really appreciate that, you have made my day! <3